EDMONTON -- Hundreds of demonstrators, including People's Party of Canada leader Maxime Bernier, rallied in front of the Alberta legislature building Monday to call for an end to the province's COVID-19 health restrictions.

The group is calling for the government to "fully open Alberta and protect the vulnerable."

"It's time for Albertans to unite and demand a new direction from our province," reads a statement from organizers. "We need to once again become a beacon of hope, opportunity, and freedom."

The crowd appeared to reach between 300 and 400 about a half hour after the rally began at noon, although provincial sheriffs would later estimate the crowd peaked at about 750.

Almost all at the gathering were unmasked. Speakers addressed the crowd from a podium fronted with a sign reading, "stop moving the goal posts" in reference to the province's changing reopening plan.

"Our freedoms are under attack," Bernier told the crowd. "And we must defend our rights, our way of life and our western civilization values."

Some in the crowd also chanted "lock her up" in reference to the province's chief medical officer of health, Dr. Deena Hinshaw, and "Just say 'no' to vaccines," according Premier Jason Kenney.

In a Twitter thread late Monday, he condemned those using threats and intimidation to protest the province's public health measures.

"It's particularly offensive to threaten a committed public servant like Dr. Hinshaw, a consummate professional who has offered the best possible health advice to govt. I call on those responsible to stop the threats & law breaking, which is a disservice to their own cause." 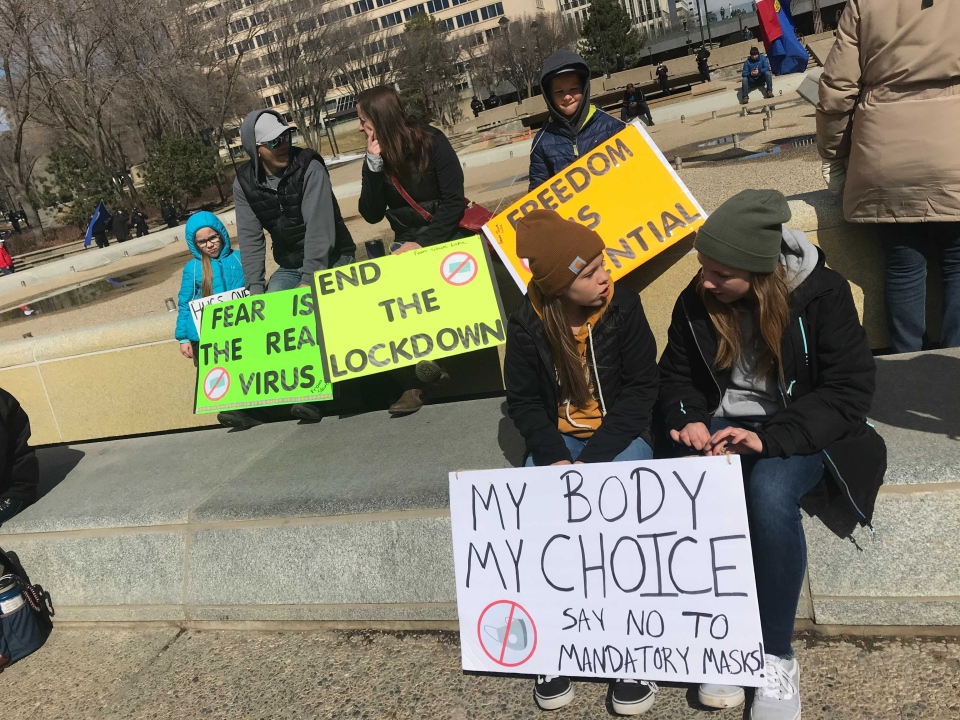 Kenney also referenced another large protest on Sunday at GraceLife Church west of Edmonton -- recently closed by health officials for violating restrictions -- which saw the arrest of a protester who allegedly shouted racial insults at a First Nations woman on a nearby reserve, and a car belonging to the chief of Enoch Cree Nation vandalized.

"Albertans respect the freedoms of speech and protest," Kenney wrote.

"But breaking the law, trespassing, threats and intimidation go too far. I condemn these actions and statements. It is increasingly clear that many involved in these protests are unhinged conspiracy theorists."

Alberta's public health restrictions have not included more forceful measures like the curfew currently in effect in Quebec or the stay-at-home order issued in Ontario.

The PPC ran 315 candidates and received more than 294,000 votes across the country in the 2019 federal election, but failed to win election in any riding.

Alberta has seen a recent surge in cases, with the number of active cases surpassing 14,000, about where it was in late December. Hospitalizations and test positivity have also increased over the month of April.

To date, nearly 850,000 doses of COVID-19 vaccine have been administered to Albertans, including close to 165,000 second doses.