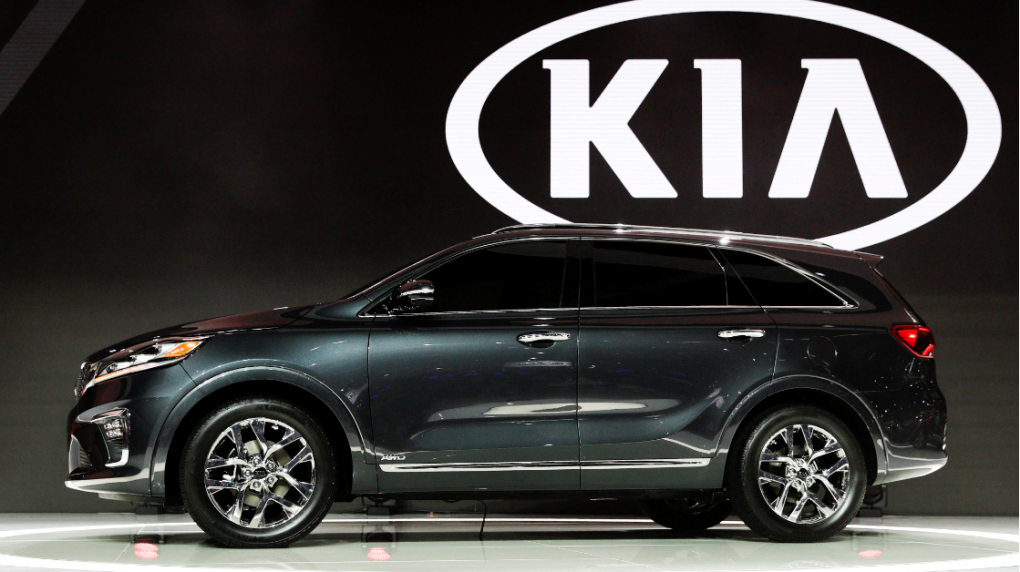 An ad for the 2019 Kia Sorento, seen here at its unveiling at the 2017 Los Angeles Auto Show, broke Canadian advertising rules, according to the Ad Standards council (Ap Photo/Jae C. Hong)

EDMONTON -- It seems like your typical television car commercial.

A 2019 Kia Sorento is shown driving along a roadway in a showcase of its speed and handling.

The vehicle turns off the road and onto a dirt road before Sorento traversing a small stream as it crashes over rocks and water to get from one side to the other.

The offroading showcase is heightened by rainbow-coloured lasers chasing the vehicle through a forested area.

While seemingly unremarkable, the TV and YouTube spot has landed Kia in trouble with Canada’s Ad Standards council who found the commercial “directly encouraged and exhibited obvious indifference to unlawful behaviour.”

The decision followed a complaint from an Alberta resident who claimed that it's illegal to cross rivers or streams with a motorized vehicle.

Kia argued that the scene was shot on a private ranch in the United States and included a disclaimer reading, “Professional Driver. Closed Course.”

But, the council ruled the ad broke the Canadian Code of Advertising Standards clause on encouraging or exhibiting “obvious indifference to unlawful behaviour”, noting in its ruling “the fact that activity is legal where the ad was filmed was not relevant to the analysis.”

The commercial appears to have been removed from Kia Canada's YouTube and social media channels.

‘DISAPPOINTED IN ITS DECISION’

The council made its initial ruling on the advertisement after receiving the complaint, noting it sought external legal advice on Alberta’s laws.

“It is contrary to law in Alberta to drive a wheeled vehicle across beds and shores of permanent and naturally occurring bodies of water, rivers and streams,” reads the ruling.

The law is set out in the Public Lands Act, which prohibits " the disturbance of any public land in any manner that results or is likely to result in injury to the bed or shore of any river, stream, watercourse, lake or other body of water."

The council noted that further review would be required if similar laws applied in other provinces.

Kia fought the decision, and filed an appeal arguing its commercial didn’t necessarily show illegal behaviour, noting “not all water, rivers, and streams … are public land."

“It is possible that the scene in question occurred on privately owned land,” the company’s appeal read.

But, an appeal panel unanimously upheld the original council decision.

“The vehicle was shown on public roads and through forested areas, and there were no clear indications in the commercial that the scene had transitioned from public to private land when the body of water is shown,” the appeal ruling reads.

“There was no indication that the driver had returned home or otherwise travelled onto privately owned land.”

The appeal panel also described the disclaimer as “generic in nature” and the “the general impression created by the commercial was that all scenes took place on public land.”

“Kia Canada acknowledges and shares the Ad Standards’ genuine concern for the environment. That said, it is in disagreement with the Ad council's findings and disappointed in its decision given the facts of the case.”

The Ad Standards council is made up of between five and seven people with membership split between the industry and the public.