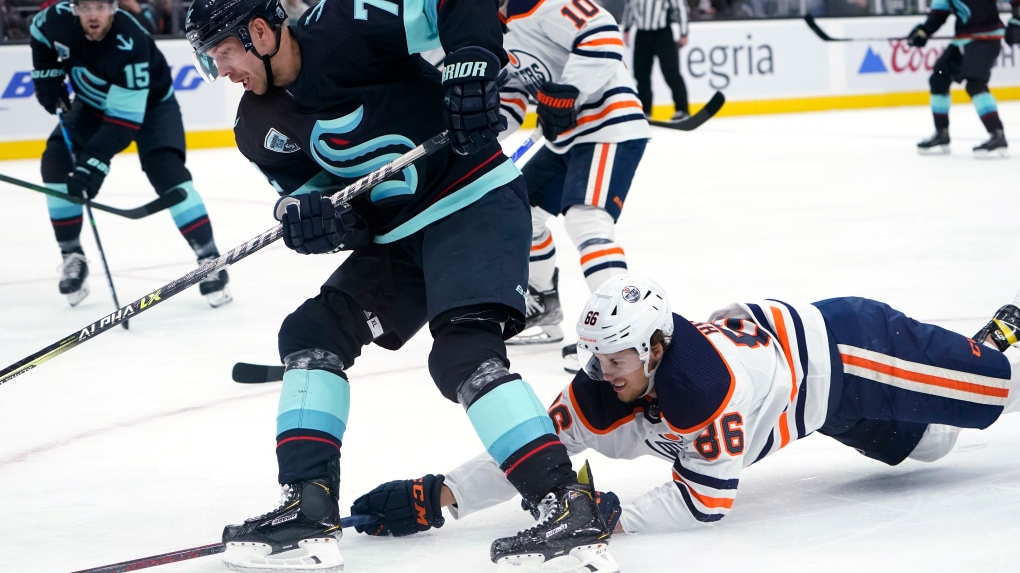 Though it took a little more than a month to find a style of play that would lead to success, the expansion Seattle Kraken are now rolling.

And they're beating some pretty good teams along the way.

Colin Blackwell and Alex Wennberg scored less than three minutes apart in the second period, and the Kraken beat the Edmonton Oilers 4-3 on Friday night.

Yanni Gourde and Adam Larsson scored in the first period for the Kraken, and Philipp Grubauer had 29 saves - including 13 in the third period.

“I think we're getting a lot of great efforts from up and down the lineup. I think tonight's a great example of, we had some adversity, but we were able to weather the storm,” Blackwell said. “I think maybe in the beginning of the season, that might have happened and we might have lost a game or something like that. But we really got that identity rolling right now.”

After a five-point road trip, Seattle returned home and won its third in the past four and fifth in the past seven, most of those coming against some of the top teams in the league.

Three of Seattle's previous four wins had come against some of the best in the Eastern Conference with victories at home over Washington and Carolina, and a road win at Florida. Since Nov. 21, Seattle is 5-1-1 and its 11 points are tied with Minnesota for the most in the league.

Connor McDavid, Leon Draisaitl and Evan Bouchard each had a goal and an assist for the Oilers. Stuart Skinner made 30 saves as Edmonton snapped a three-game win streak.

McDavid pulled with Oilers within one on his 16th with 8:16 remaining in the third.

Edmonton got a power player with 1:31 left after Larsson was called for roughing, but couldn't find an equalizer even with a 6-on-4 advantage.

Gourde scored his sixth goal of the season 49 seconds into the game to put Seattle up 1-0.

Draisaitl scored his league-high 21st to tie it at 6:41 on in the first period, and Larsson scored against his former team to put Seattle back ahead with 9:22 remaining.

Bouchard scored on a slap shot at 8:12 of the second to tie it.

Blackwell put the Kraken back ahead with 6:54 remining in the middle period, and Wennberg gave Seattle a 4-2 lead a two-goal 2:47 later. Wennberg appeared to be sending a pass to Marcus Johansson and it deflected into the Edmonton net.

Skinner's glove save on Morgan Geekie with 8:32 remaining in the third a Seattle power play kept it a two-goal deficit and 16 seconds later, as the advantage ended, McDavid tipped Bouchard's shot from the point past Grubauer.

“We had a good push and fought our way back a little bit, but just a little short there,” said Edmonton's Ryan Nugent-Hopkins, who had two assists. “But I mean overall it's a pretty solid game and (Skinner) made some pretty big saves to keep us in it late.”

Edmonton's Kailer Yamamoto and Derek Ryan became the first NHL players born in the state of Washington to play a regular season in the state. Both players are from Spokane.