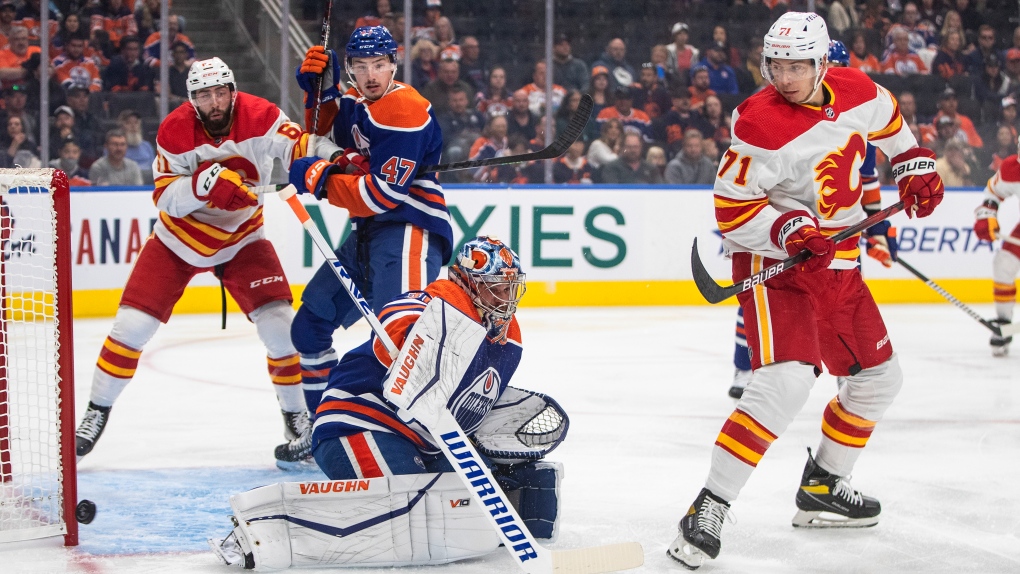 Fans in Edmonton were celebrating seeing Connor McDavid make it to the final whistle as much as getting a victory on Friday.

Brett Kulak scored the game winner as the veteran-laden Edmonton Oilers earned a 2-1 pre-season win over the rival Calgary Flames. But it was the scare late in the second period that had the entire stadium holding its collective breath.

McDavid collided hard with teammate Evander Kane in the neutral zone and was slow to get up. However, McDavid returned to finish out the frame and the contest.

“I was trying to get out of the way, but those things happen,” Kane said. “It’s the first pre-season game (for us both), but that’s to be expected.

“I knew he was OK. He’s a big, strong guy. He was a little surprised more than anything.”

Oilers goalie Jack Campbell, who stopped 7-of-8 shots in his Edmonton debut, said he was with the fans in holding his breath.

“Your heart stops for sure,” he said. “When anybody on the team goes down it’s always scary. You hope they pop right up and thankfully he did. He’s a tough guy. Kane is a strong guy, too, so it was a pretty big collision.”

Leon Draisaitl also scored for the Oilers (2-2-0), who came off a 4-0 road loss to Calgary on Wednesday.

Dillon Dube put the Flames (3-2) on the board for their lone score on a night where most of their top players sat out.

“It sucks we didn’t get the W, because we played well. The guys did a good job in front of me,” said Flames goalie Dan Vladar, who made 36 saves in the loss. “We were close. We had some really good chances at the end. I could have stopped that second goal. It could have been a different story.”

Edmonton opened the scoring 8:38 into the opening period with a short-handed marker as Kailer Yamamoto stole the puck deep in Calgary's zone and sent a long pass through the crease to give Draisaitl an easy tap-in before Vladar could get across.

Calgary tied the game 15:49 into the first as some sloppy play behind the net led to a point-blank goal from Dube.

Calvin Pickard replaced Campbell just over halfway through the second period and made 14 saves in 28 minutes of action.

Edmonton took the lead 8:55 into the third period as Luke Esposito brought the puck into Calgary's end before sending it to Kulak at the point, where he beat Vladar with a long shot.

The Oilers return to action Saturday to take on the Winnipeg Jets. The Flames next play Monday against the Seattle Kraken at home.

Notes: The Oilers have four pre-season games remaining to Calgary’s three … Edmonton fans got their first ever look at Campbell in an Oilers uniform in net. The former Toronto Maple Leaf starter bolted to Edmonton in free agency this summer, signing a five-year, US$25-million deal after posting a 31-9-6 record with the Leafs last season.

This report by The Canadian Press was first published Sept. 30, 2022.

A mass shooting survivor and spokeswoman for gun-control group PolySeSouvient says it is 'incredibly disrespectful' for firearm rights advocates to invoke the group's name in a merchandise sale discount code.

A memorial totem pole taken almost a century ago from the Nisga'a Nation in British Columbia is being returned to its homelands, says the National Museum of Scotland.

The deaths of four University of Idaho students nearly three weeks ago has riled up thousands of would-be armchair sleuths, many of whom are posting speculation and unfounded rumors about the fatal stabbings online.

Lawyers for 'Freedom Convoy' organizers have won their bid to get access to unredacted versions of 20 documents at the Public Order Emergency Commission.