Kelsey Ouellette experienced a "life-changing event" months before she was shot dead in central Edmonton, investigators have revealed, pleading for anyone with information about the event to come forward.

In an investigation update on Wednesday, police also released video of a white Toyota SUV that was seen in the area and around the time of Ouellette's death on Nov. 5.

Det. Jared Buhler would not describe the recent change in Ouellette's life in any greater detail.

"We're confident that the people who are aware of this event and the events surrounding it will understand what it is," he told reporters on Wednesday.

"Some of those people are likely, I believe, following the story closely in the media. We can't locate them at the moment, but we know they have information of relevance to the investigation."

He also confirmed, for the first time, that police believe Ouellette's murder was targeted.

"Our investigation suggests it was a planned ambush against a defenseless victim." 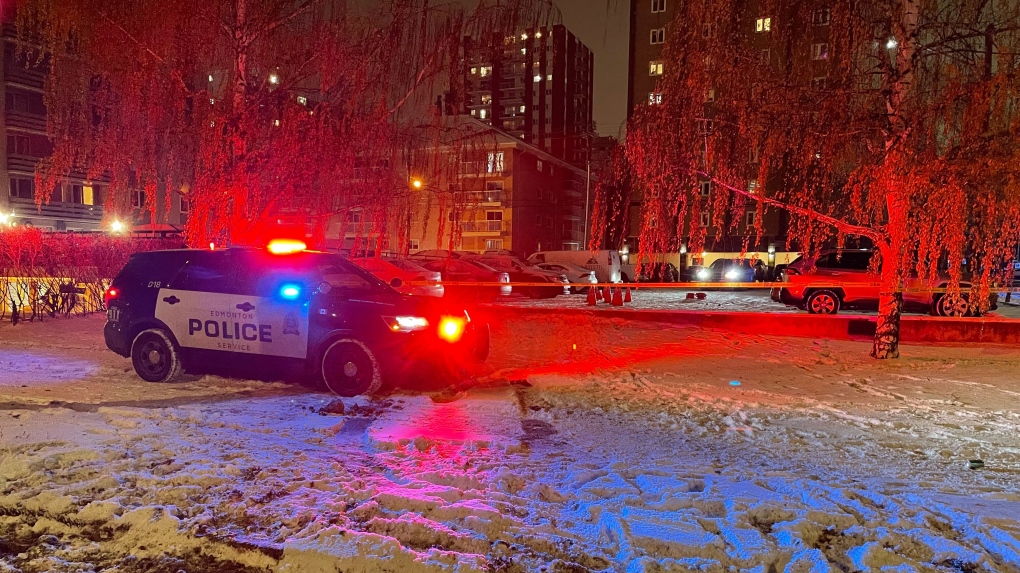 The 31-year-old woman who had lived in Edmonton for "several years" was found in a vehicle near Jasper Avenue and 116 Street, near where she lived, Buhler said. Police found her after receiving multiple calls about gunshots ringing out in the Oliver community.

Investigators are calling a white Toyota SUV that was seen in the area at the time a "suspect vehicle" and believe it is the same as a 2016 white Toyota Highlander that was found burning later that evening in the area of 259 Avenue and 18 Street, a rural area just within the city's northeast boundary.

Forensics will confirm the investigators' hypothesis.

According to police, the Highlander was stolen from northwest Calgary in August and, when found, featured an Alberta licence plate that was stolen from west Edmonton in early October: CKP5569.

The plate was ticketed by photo radar on Oct. 21 in the westbound lanes of Yellowhead Trail at 107 Street, leading police to believe the vehicle was in Edmonton for at least a few weeks prior to the murder. 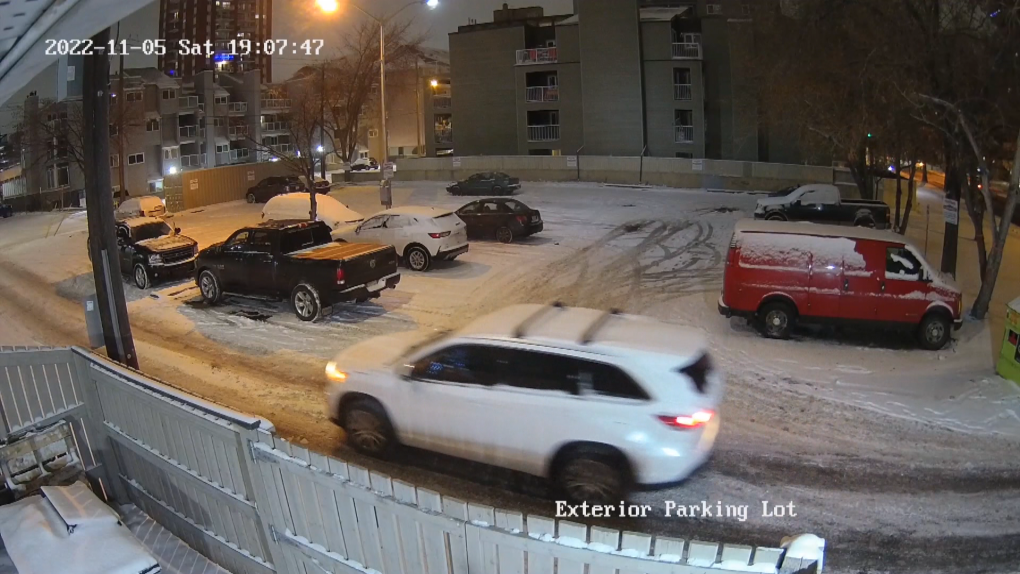 A white Toyota SUV was seen near Edmonton's Jasper Avenue and 116 Street on Nov. 5, 2022. Kelsey Ouellette, 31, was found shot to death in the area that evening. (Photo provided by police.)

Buhler asked anyone – from community members who may have noticed the stolen SUV parked on their street, to someone who may have possessed it after it was stolen – to contact police.

"Understanding how that vehicle came to be in Edmonton, where it was in Edmonton, and how it may have ended up in the hands of someone who's willing to commit a violent offence like this is important to the investigation," he said.

"Someone may have given that vehicle to the shooter. They may have never known this was the intention. But now that you know the end result, my appeal to them is to do the right thing. We understand that people come in all shades of grey, and we're willing to look past that in this case to help bring some justice to this young lady's family." 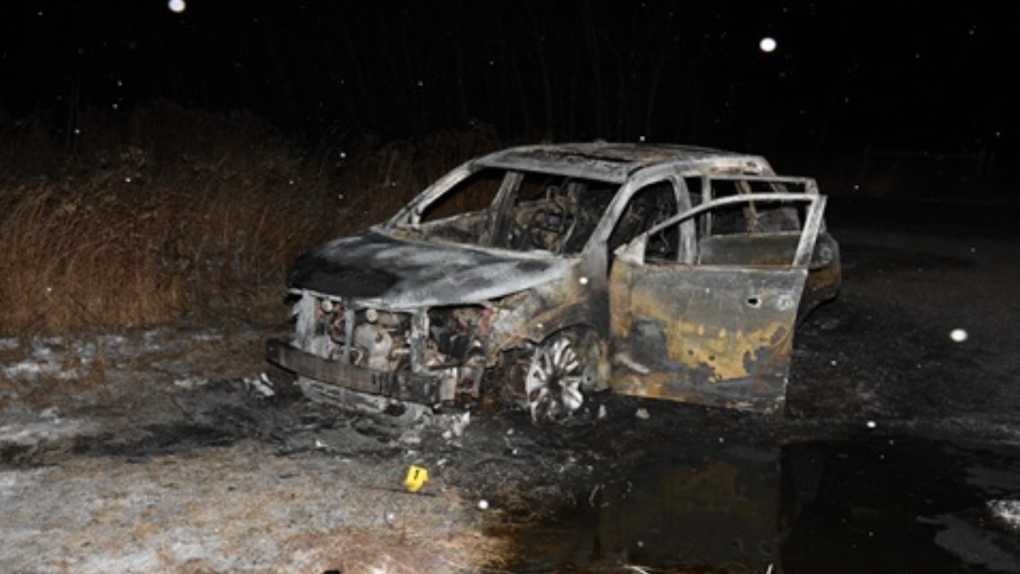 Edmonton police are investigating whether a 2016 white Toyota Highlander, found burning near 259 Avenue and 18 Street on Nov. 5, 2022, is the same white Toyota SUV seen near the scene of Kelsey Ouellette's homicide that same day. (Photo provided by police.)

Buhler called it a strategy typically associated with gang violence.

When asked if Ouellette's death was gang violence, he said, "All I can say in that regard is that there were people in Kelsey's orbit who are well known to police."

Ouellette, herself, was not known to police prior to being killed, Buhler added.

"I think it's fair to say this file is exceptional in that the victim appears to not necessarily been directly involved in criminal activity herself, but was for some reason, targeted."

Buhler also read a statement on behalf of Ouellette's family:

"Our family's hearts are broken at Kelsey's death. There are no words to convey the experience of losing a loved one in the manner that Kelsey was taken from us. Our daughter was a beautiful, smart, and vibrant woman who loved life, family, friends, and children. We desperately need answers as to why she was taken from us. Kelsey will be forever missed and never forgotten. Our family will not be able to rest until her murder is solved. We urge anyone with information to contact the Edmonton Police Service."

Anyone with information about the vehicles, scenes, or Ouellette's personal life event, or who has dash cam or security footage from near the scenes is asked to call police or Crime Stoppers.

What should Canada be doing about climate change? 25 recommendations

The national Net-Zero Advisory Body released 25 recommendations Friday for how Canada can adjust its climate plan to reach net-zero emissions by 2050 — a goal that the country is not on track to reach right now, according to the report.

The federal government posted a budgetary deficit of $3.6 billion in the first eight months of the fiscal year.

What looks like a giant teddy bear’s face peering into space from the surface of Mars is actually a satellite image of some craters and a circular fracture, scientists say.

Some U.S. auto insurers are refusing to cover some Hyundai and Kia models

Progressive and State Farm, two of America's largest auto insurers, are refusing to write policies in certain cities for some older Hyundai and Kia models that have been deemed too easy to steal, according to one of the insurance companies and media reports.

'It Ends With Us' movie casts Blake Lively and Justin Baldoni

BookTok is all abuzz with the news that Blake Lively and Justin Baldoni will be starring in a movie based on the bestselling romance novel, "It Ends With Us."