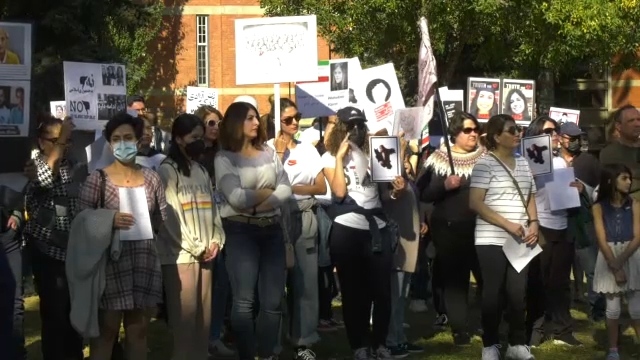 A pair of rallies in Alberta's largest cities on Saturday echoed chants worldwide over the death of Mahsa Amini, an Iranian woman detained allegedly for wearing her hijab improperly.

Thousands of Iranians have taken to the streets for the past two weeks protesting Amini's death, venting anger over the treatment of women in that country.

Javad Soleimani, an organizer for the solidarity rally in Edmonton, said it is important for those outside the Middle Eastern country to show support.

"Over the past 44 years, the Iranian people have endured numerous suffering and they have now made their choice," he said. "Enough is enough."

"As long as we have a government like the Iranian regime, the world is not a safe place for us," he added.

Protests have erupted worldwide, showing solidarity with the growing uprising in Iran demanding more freedom and recognition of human rights.

Nastaran Bazzazi, an organizer for the Calgary rally, said she and others have cut their hair in solidarity.

"The government in Iran, which is based on injustice, discrimination against women, LGTBQ, ethnic minorities, and other religion believers," Bazzazi said. "We are burning for the injustice in Iran."

"People in Iran are now bravely protesting," Soleimani said. "The Iranian regime is brutally suppressing them, but the Iranian people are not going to give up, and this is very important for us outside of Iran to increase their voice and awareness of what is going on."

Grant Wahl, one of the most well-known soccer writers in the United States, died early Saturday while covering the World Cup match between Argentina and the Netherlands.

Phase 1 of Canada's single-use plastics ban comes into effect this month. These are the products on the list

The search for a Washington state woman whose husband couldn't find her after spotting a shark while they were snorkeling in Hawaii was called off Friday.

Google's top trends: What did Canadians search for in 2022?

As we approach the new year, Google is providing a glimpse at what 2022 looked like for Canadians, based on the most popular search terms entered on the site.