After a year of community members countering hateful messaging through demonstrations of inclusivity and dance parties, the City of Edmonton officially recognized Pride Corner on Whyte.

Every Friday, members of the LGBTQ2S+ community and allies gathered on the corner of 104 Street and Whyte Avenue to show messages of love and support while pushing out religious street preachers who organizers say spread harmful rhetoric.

After a petition garnered more than 10,000 signatures, Mayor Amarjeet Sohi made the historic proclamation officially recognizing the site as Pride Corner.

"This was incredible to have an official proclamation from the mayor and to just be officially recognized," said Erica Posteraro, an organizer.

"A lot of people, especially queer folks, have felt pretty unsafe on this corner due to some religious street preachers that have been in the area and said some pretty harmful and homophobic things," Posteraro added.

August Redge, a youth leader, told CTV News Edmonton how before the pride demonstrations, hateful speeches from street preachers made many people feel uncomfortable in the area or crossing at different corners.

"It's just great to see that change," Redge said. "We don't have to have them out there preaching hate and just enjoy this."

"This is a safe space for me, and I have a lot of friends here," they added. "I love coming every week. It'll be Monday, and I'll be like, I can't wait for Friday."

On Friday evening, more than a hundred people joined a ceremony to mark the proclamation, including Martin Boyce, a Stonewall participant and now LGBTQ2S+ activist.

"This may seem a small thing to you," Boyce told community members. "It's not. Believe me. Let us see what this develops into, and I'm sure it's something you can all be proud of." 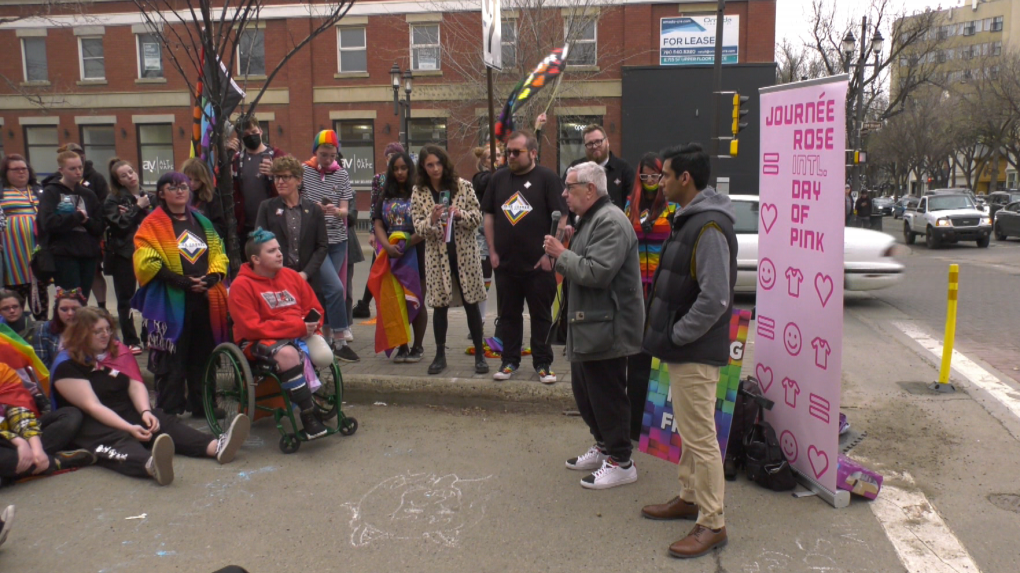 "For years, we were tormented by the street preachers who were often in people's faces and saying some really homophobic things," he told CTV News Edmonton. "A group of young citizens took it upon themselves to create a more welcoming space on Whyte Avenue.

"And it grew," he added. "It became a safe space for many young LGBTQ+ youth, some of whom are at the Youth Emergency Shelter."

Now, the community-led initiative hopes to install a permanent sign on the corner.

Posteraro said the initiative has not only created a safer space but a supportive community showing that anyone can be heard, supported, and accepted.

"We want to show there's love and inclusivity for the queer community," she added. "We wanted to change the narrative."