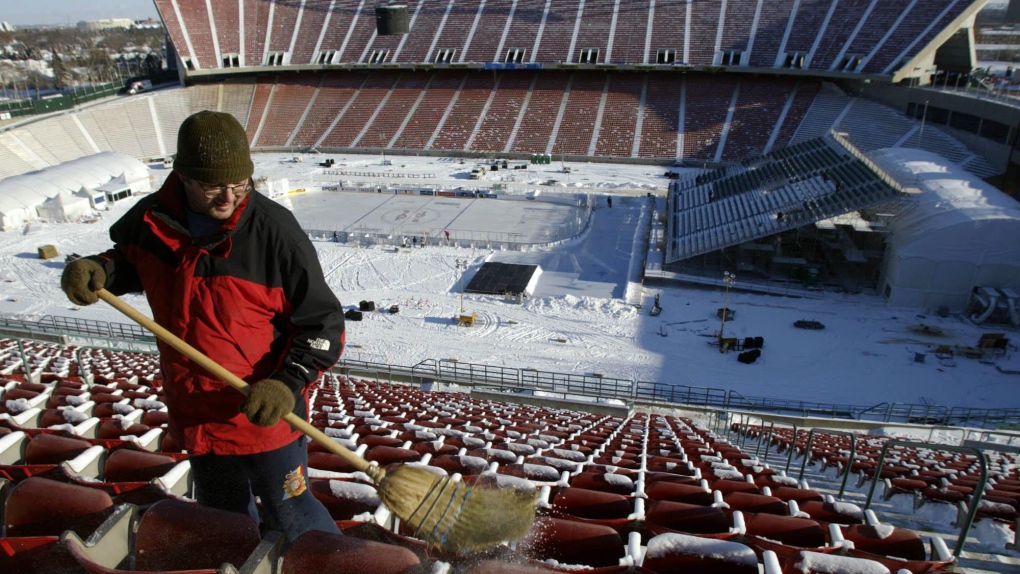 Dave Blais clears snow from the seats in the upper bowl of Commonwealth Stadium in preparation for the Heritage Classic outdoor hockey game Thursday, November 20, 2003 in Edmonton.(CP PHOTO/Adrian Wyld)

The Edmonton Oilers will play outdoors in the Alberta capital in October 2023, according to a pair of TSN insiders.

The game will mark 20 years since the Heritage Classic on Nov. 22, 2003 when the Montreal Canadiens beat the Oilers 4-3 at a bitterly cold Commonwealth Stadium.

Jason Gregor from TSN 1260 reported Tuesday a game will happen and said he expects Edmonton to play Calgary.

"There's been an opportunity maybe in some previous years to bring an outdoor game to Edmonton, but the league wanted to hold off to do it to mark this anniversary," NHL Insider Chris Johnston added on SportsCentre.

"There's still some details to be worked out on the exact day of the game and the opponent."

A spokesperson for the Oilers Entertainment Group would not confirm any details above a desire to host the event.

“We are currently exploring an outdoor game for Edmonton, but have no agreement with the league at this point,” Kevin Rapanos told CTV News Edmonton.

The Heritage Classic was the first outdoor regular season game in NHL history. Attendance for that event is listed at 57,167.

Since the original Edmonton game, more than 30 others have been held outdoors, most of them called Winter Classic or Stadium Series.

The next one will be at Fenway Park in Boston on Jan. 2.