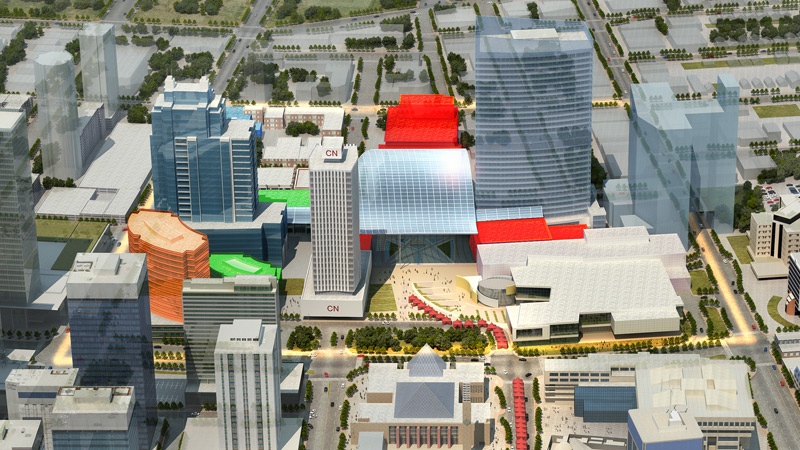 An artists' rendering shows the proposed Edmonton Downtown Academic and Cultural Centre, which would be built just north of City Hall. Supplied.

A framework agreement for a new arts centre in downtown Edmonton has been approved by the City Council Executive Committee.

The centre, known as The Galleria Project, would include four performing arts theatres, a galleria and more than 600,000 square feet of space for the University of Alberta, which plans to move in its School of Music and Department of Art and Design.

The building would be constructed just north of 104 Avenue, across from City Hall, between the EPCOR tower and the new Royal Alberta Museum.

“We’d like to be in the ground, with aspects of it, next year,” said the director of the Edmonton Downtown Academic and Cultural Centre Foundation, Jim Brown, outside the Executive Committee Meeting Monday.

The not-for-profit foundation behind the project is asking the city to contribute $90 million to the centre, mostly in the form of land acquisition. Those funds would also cover an extension of the LRT pedway from Churchill Station to the forecourt of the Galleria, under 103A Avenue.

“The value of the land in terms of transfer is nominal, so what we’re talking about in terms of city contribution, it’s approximately 10 percent of the total project,” said Brown.

Brown said there are many more steps to take before construction can start, including finishing a lease agreement with the University and completing community consultation.

Still, he is confident the centre will move forward.

“We are very appreciative of the support we’ve received both from the University and from the City of Edmonton. So yes, we are very excited about it.”

The project’s latest developments will be brought before council next week.

With files from Ashley Molnar