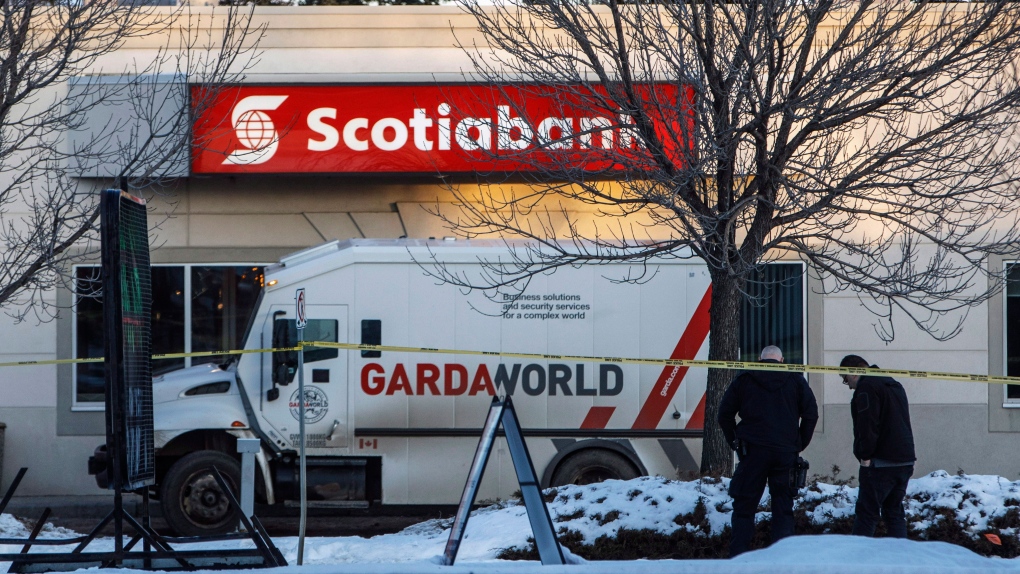 A B.C. man who detonated explosives at two Edmonton banks in 2018 has been sentenced to 9 1/2 years.

Justin Byron, 41, of Salmon Arm, B.C., pleaded guilty to making explosive devices, robbery with a firearm, aggravated assault and causing an explosion with intent to cause bodily harm.

“He intended to cause bodily harm … and he succeeded.”

The first incident occurred in September of 2018 at Royal Bank in southwest Edmonton. No money was taken but two security guards were injured by an improvised explosive device.

The second incident took place three months later at a northeast Edmonton Scotiabank location. Two GardaWorld guards were hospitalized after another explosive device was set off and an unknown amount of money was taken.

“The robberies consisted of planned ambushes with no motivation but pure greed,” Friesen said. “He should have both known better and done better.”

At the sentencing hearing in June, one of the guards described how he is permanently scarred, still suffers from hearing problems and has suffered financial and emotional harm.

Court heard that the first attack took place just over two weeks after the birth of his son and that Byron wanted the money to help pay for medical bills.

But, Friesen noted that there was no concrete evidence that the money taken was ever used to pay for medical expenses.

“To choose the path he did when confronted with intense financial and familial health pressures -- similar to what thousands of other Canadian families are confronted with on a daily basis -- is inexplicable and unjustifiable,” Friesen said.

“It is not the kind of a choice a pro-social person would ever even consider.”

With enhanced credit for more than 2 1/2 years already served in custody, Byron has just under five years remaining on his sentence.

North Korea on Monday fired at least one suspected ballistic missile into the sea in its fourth weapons launch this month, officials in South Korea and Japan said, as it continues to demonstrate its military might amid pandemic border closures and paused diplomacy with the United States.

Neighbours use kayaks to rescue driver after car crashes through ice in Manotick, Ont.

Ottawa paramedics say the driver declined treatment after being rescued from the Rideau River after a car crashed through the ice.