A growing trend of ranchers deciding to leave the industry as the cost of doing business continues to surge has some calling for industry change and awareness of what farmers go through to get meat to market.

Sean McGrath, a fifth-generation rancher near Lloydminster, told CTV News Edmonton that consecutive bad weather seasons and the rising cost of doing business drive many families from the industry.

Farms in southern Alberta have been dealing with three years worth of weather-related complications, McGrath added, with last year's drought impacting his northern Alberta ranchlands.

In addition, the rising cost of feed supplies and fuel is forcing some farmers to reduce their herd sizes, McGrath said.

"It's been a squeeze for everyone," McGrath said, who also is a ranching consultant.

A presentation he recently saw from the Canadian Roundtable for Sustainable Beef showed the average return for a 200-cow herd is now just under $18,000.

McGrath says some ranchers can have a $2 to $5 million investment tied into their farm, depending on its size.

"Depending on family and debt load and ties to the land and personal goals and all those types of things, I don't know what the industry is going to look like in the next 20 years."

'A LOT OF PEOPLE ARE CHOOSING TO EXIT'

According to Statistics Canada, cattle herds in the country fell to the lowest recorded levels since July. 1, 1988.

Since 2005, cattle inventories have declined year-over-year while Canadian hog and sheep generally increased.

As of this July 1, Canadian farmers held 12.3 million cattle and calves, a 2.8 per cent decline from last year — the most significant year-over-year decrease since summer 2015.

The Canadian beef cow inventory has declined for three consecutive years, with beef heifers for breeding experiencing a 7.4 per cent decline in 2022 compared to last year.

Manitoba saw a minus 6.9 per cent herd reduction, with Saskatchewan and Alberta reporting minus 4.2 per cent and two per cent reductions, respectively.

The number of cattle farms have also declined since 2004, with the national statistics agency attributing it to "business consolidations."

"A lot of people are choosing to exit," he added.

That should be concerning to consumers, who are sometimes paying record prices for beef at the grocery, but also to the greater Alberta economy, McGrath explained.

"The industry employs a lot of people when you start going down the chain," he said, adding that includes workers involved with meat processing, transportation, retailing and marketing.

"It's a major employer," McGrath said. "It contributes a lot to the economy, and the other thing that I think should be a concern is that ranchers punch above their weight class when it comes to some of the environmental preservation (actions, like) maintaining biodiversity, maintaining some of these native rangelands that do water filtration, carbon sequestration."

'THE PROFIT MARGIN IS VERY SLIM'

Shelby Blosky has been involved in ranching for 15 years alongside her husband Shayne. The pair own and operate Double S Ranch near Carnwood, Alta.

In her time in the industry, Shelby says she's seen countless ranchers decide to shut their farms down for good.

"There's a lot of people that are just saying enough is enough, especially the older generation," she told CTV News Edmonton. "It's too much. It's too expensive. You are spending more than you are bringing in."

The pair decided to forgo the traditional style of cattle raising and selling to feedlots by selling directly to customers.

"Raising the calves up and selling them to the commercial market in the fall just didn't make sense," Shelby said.

After buying young calves, the Bloskys raise them and send them to the butcher for processing once they are ready. Then they get the meat back, package it and sell it directly to consumers.

"The profit margin is very slim," she added. "We struggle to pay bills sometime, but we get through it."

"We try and be competitive with the grocery store as much as we can while still making it make sense," Shayne echoed. "If you worked out my hourly rate doing this, I am probably making much less than minimum wage." 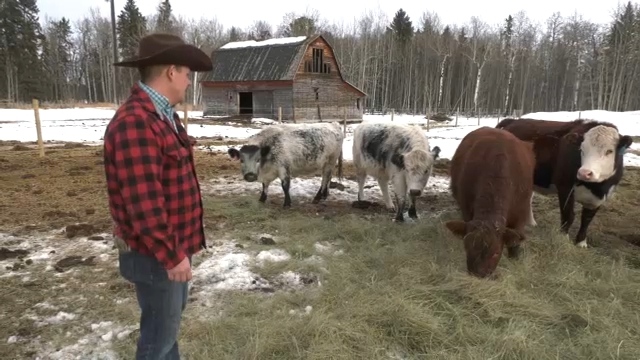 Shayne Blosky watches over some of his herd at his family farm near near Carnwood, a central Alberta community approximately 72 kilometres west of Leduc (CTV News Edmonton/Cam Wiebe).

Shelby tries to engage and build a client base using social media and the couple are now building a small retail store at the corner of their farm so those in the area and travelling along the highway can stop in to buy meat.

"We just keep pushing as we can," Shelby said.

McGrath believes the entire industry will need to pivot and adapt to ensure farmers can make a liveable wage.

"I've sold entire cows for less than the price of that loin (in the grocery store)," he added. "The percentage that the producer gets is small in that total cost and it's also driven globally by prices and forces (like fuel or feed)."

For the Bloskys, no matter what happens, they are sticking with ranching.

"We need cattle," Shelby said. "We need producers and it needs to make sense for the producers to get into cattle or to grow their herds. People need to eat."

"Farmers are forever optimistic; next year's going to be better," she added with a smile. "That's kind of what we live on." 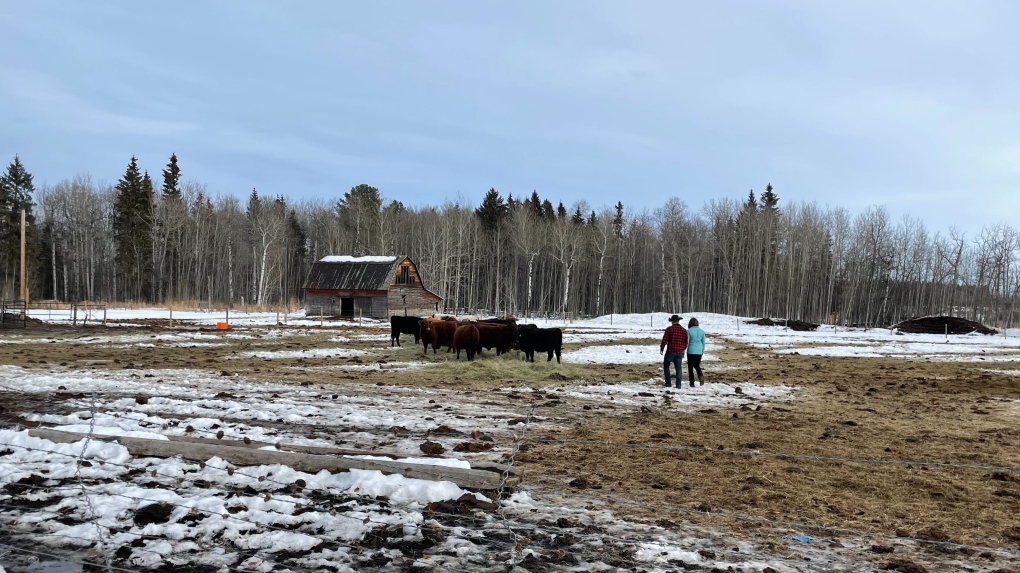 Her husband says he couldn't imagine doing any other job, as he adores the ranching lifestyle.

"This is what I love to do," Shayne added. "We slowly build ourselves every year. It would be great if we could multiply that a little bit quicker, but I don't want to lose what we've gained."

A powerful 7.8 magnitude earthquake rocked wide swaths of Turkiye and Syria early Monday, toppling hundreds of buildings and killing more than 1,300 people. Hundreds were still believed to be trapped under rubble, and the toll was expected to rise as rescue workers searched mounds of wreckage in cities and towns across the area.

Experts say the outlook for the loonie in 2023 largely depends on commodity prices, how the U.S. dollar fares, and whether central banks are successful in avoiding a major recession.

The first of the Leopard 2 tanks Canada is donating to Ukrainian forces has arrived in Poland.

She started throwing punches to get exercise during the COVID-19 pandemic, but now 17-year-old Talia Birch is gearing up to compete in the Canada Games as it opens up to female boxers for the first time

Beyonce sits alone atop the Grammy throne as the ceremony's most decorated artist in history, but at the end of Sunday's show it was Harry Styles who walked away with the album of the year honour.

Canadian pop favourites Michael Bublé and Drake each have a shiny new Grammy on their shelves, while singer-songwriter Tobias Jesso Jr. has two, thanks in part to Harry Styles.

Charles Kimbrough, a Tony- and Emmy-nominated actor who played a straight-laced news anchor opposite Candice Bergen on 'Murphy Brown,' died Jan. 11 in Culver City, California. He was 86.