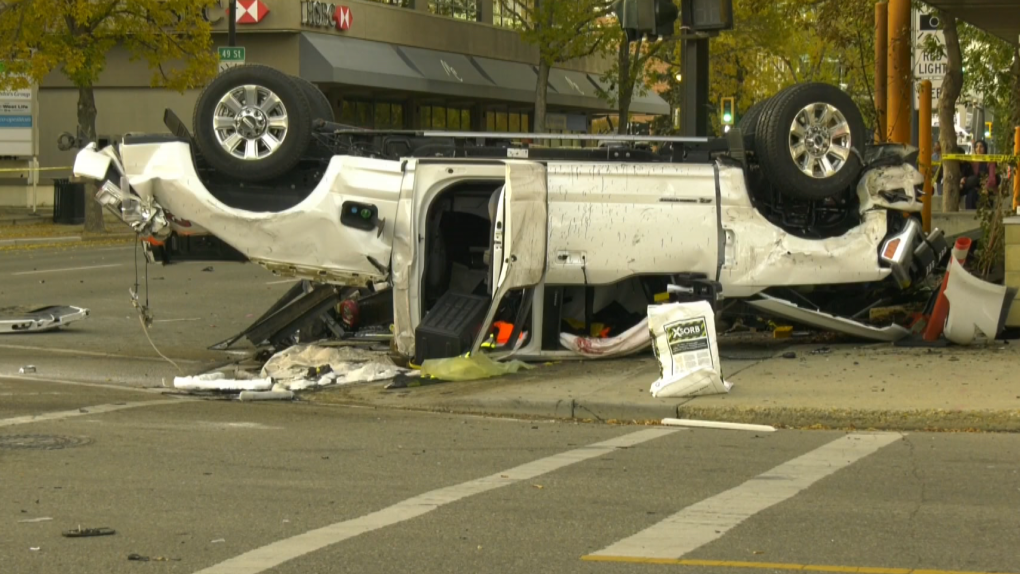 Two people are in hospital after a suspect vehicle police were pursuing crashed into a pick-up truck in downtown Red Deer.

RCMP say a male, armed with a firearm, performed two car-jackings, one in Lacombe, Alta., and the other in Red Deer, Monday evening.

At 4:35 p.m. RCMP received a “be on the lookout for” (BOLO) from the Lacombe Police Service reporting that an armed car-jacking occurred.

Mounties say the male ditched the stolen vehicle shortly before 5:24 p.m. when they stole a white Ford car in Red Deer and fled northbound on Gaetz Avenue.

“Red Deer RCMP located the stolen vehicle and attempted to stop the suspect vehicle; however, it failed to stop,” Mounties said in a media release.

According to police, the vehicle proceeded through the intersection of 48 Street and 49 Avenue where it collided with a pick-up truck, igniting vehicle fires.

The lone occupant of the pick-up truck sustained non-life threatening injuries and was taken to hospital.

Police say the suspect received serious, but non-life threatening injuries and remains in hospital. No charges have been laid.

“This investigation is in its preliminary stages and limited information is available,” RCMP said. “Further updates will be provided when available.”

CTVNews.ca asked two experts to answer common questions submitted by readers about Pfizer’s COVID-19 vaccine for children aged five to 11. Here's a look at their responses.

Actor Alec Baldwin fired a prop gun on the set of a Western and killed the cinematographer, officials said. The director of the movie was wounded, and authorities are investigating what happened. A spokesperson for Baldwin said there was an accident involving the misfire of a prop gun with blanks.

Businesses risk a 'double whammy' of potential labour shortages and a decline in consumer spending due to COVID-19 benefits ending Saturday, an economist says.

Who was Halyna Hutchins? Tributes paid to director of photography killed by prop gun

The film industry has been left shocked and in mourning after cinematographer Halyna Hutchins was killed on set when actor and producer Alec Baldwin discharged a prop firearm.

Kid-size doses of Pfizer's COVID-19 vaccine appear safe and nearly 91 per cent effective at preventing symptomatic infections in 5- to 11-year-olds, according to study details released Friday as the U.S. considers opening vaccinations to that age group.