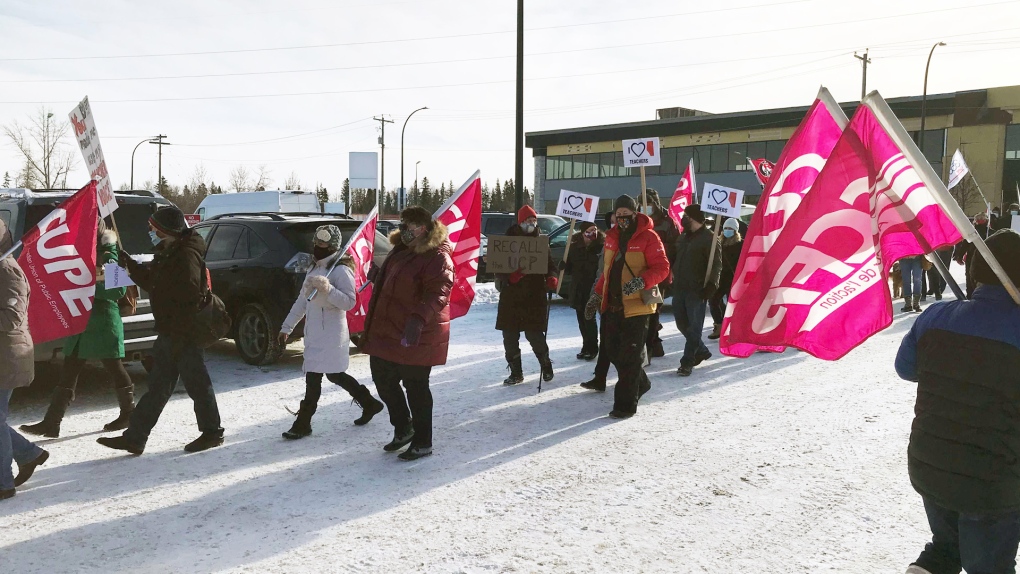 Teachers and union members rallied outside the education minister's office on Nov. 12 to demand more support for schools during the pandemic. (Nav Sangha/CTV News Edmonton)

RED DEER -- Teachers and union members rallied outside the education minister’s Red Deer office on Thursday, voicing their concerns surrounding education and the province’s response to COVID-19 in schools.

NDP Education Critic Sarah Hoffman attended the rally and said the teachers and parents she has talked to are frustrated. She said the government needs to keep students and teachers safe and smaller class sizes would be the place to start.

“They’re frustrated that the government keeps ignoring the realities of schools while cutting per pupil funding to schools in the midst of a pandemic which means there’s even more kids in classes than there were last year,” said Hoffman.

“We all know that the best way to prevent the spread is to have physical distancing, and that’s just not possible in today’s classrooms in the vast majority of our province.”

“Most teachers are telling me that they're as tired in November as they usually are in June. That’s not sustainable. We need to make sure that there’s support staff and substitute teachers available,” said Hoffman.

“We’ve been told by the Alberta government that it’s not there responsibility. That its local school boards, and we know that’s not the case,” said Gill.

Gill added that the UCP government needs to sit down and talk to teachers and staff who are work daily in the education system.

“The very first thing to do is to talk to the people involved,” said Gill.

“We’re crying out at the government to acknowledge the situation, step up with funding, work with school boards, work with the workers, and make sure that we keep things safe and that we can keep the schools open.”

However, Alberta Education Press Secretary Colin Aitchison said Alberta schools are not unsafe based on the evidence.

“As of today, only 0.1 per cent of staff and students have active cases of COVID-19, and our schools have been able to mitigate spread by following our provincial guidelines,” said Aitchison.

He said the province is committed to providing schools with the resources they need to ensure the safety and wellbeing of staff and students.

“We are in constant communication with education stakeholders, including the College of Alberta School Superintendents and the Alberta School Boards’ Association, and we continue to follow the expert advice of Alberta’s chief medical officer of health. We remain committed to adjusting our school guidelines as required.”