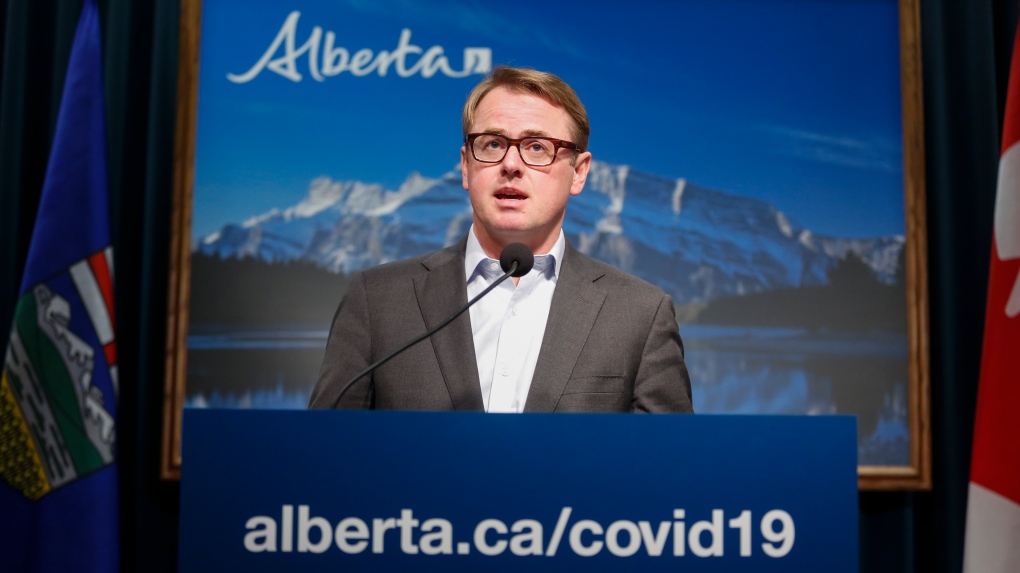 Alberta Minister of Health Tyler Shandro speaks at a press conference in Calgary on May 29, 2020. THE CANADIAN PRESS/Jeff McIntosh
EDMONTON -

The minister of health in Alberta says the NDP is “lying” and exaggerating claims about shortages in health-care staff in the province leading to temporary service level reductions.

Tyler Shandro was asked by reporters about staffing shortages at health-care facilities across the province at a media availability Monday.

Multiple hospitals across the province have faced bed closures and staff shortages. Earlier this month the Royal Alexandra hospital – the largest in Edmonton – closed six beds in their emergency room.

On Friday, another 12 beds were closed at that facility until receiving morning staff relief.

Additionally, Fort Vermillion’s St. Theresa General Hospital emergency department announced on Friday that it would have no overnight physician coverage temporarily until the end of the month.

On Saturday, the Grey Nuns Hospital in Edmonton reduced nurse service levels at their endoscopy unit due to “unforeseen medical leaves of several staff in rapid succession.”

The minister maintained on Monday that staffing reductions are temporary and that they are resulting from residual pressure from the COVID-19 pandemic and seasonal vacations.

“I understand the NDP are going to – as they’ve done for the last year and a half – hypercriticize issues and quite frankly lie,” Shandro said, “about our response to the pandemic and lying about what is actually happening in the province.

When asked if Alberta is attracting health care workers to the province, Shandro said recruitment targets were being met.

“We have a thousand more nurses than we had a year ago,” he said. “We are recruiting more. Month over month, quarter for quarter, year over year, we have more physicians, more nurses because we continue to show Alberta is a great place to live.

“Everybody wants to come to Alberta because it is an amazing place to live.”

Rachel Notley told CTV News Edmonton in a statement that the bed closures and staff reductions are "very real."

“These bed closures are publicly reported by AHS," she said. "They are very real, and they are putting Albertans at risk. It’s disgraceful that Tyler Shandro continues to gaslight Albertans and refuse to accept responsibility for his ongoing failures as Health Minister.”

Notley added that the health-care staff shortages are creating a “dangerous situation.”

“We have repeatedly called on Tyler Shandro to take action, but all he has offered Albertans is excuses and finger-pointing,” the leader of the official opposition said. “Let’s be clear: we are here because Jason Kenney acted last and acted least in the second and third waves."

Notley called on Shandro to create a plan to keep Alberta’s hospitals open, without reductions in service.

“Our healthcare heroes are burnt-out and patients who are arriving much sicker than before because their conditions have been left unaddressed for a year and a half.”