'Their lives were going to make a difference': Book explores mother's journey after losing children 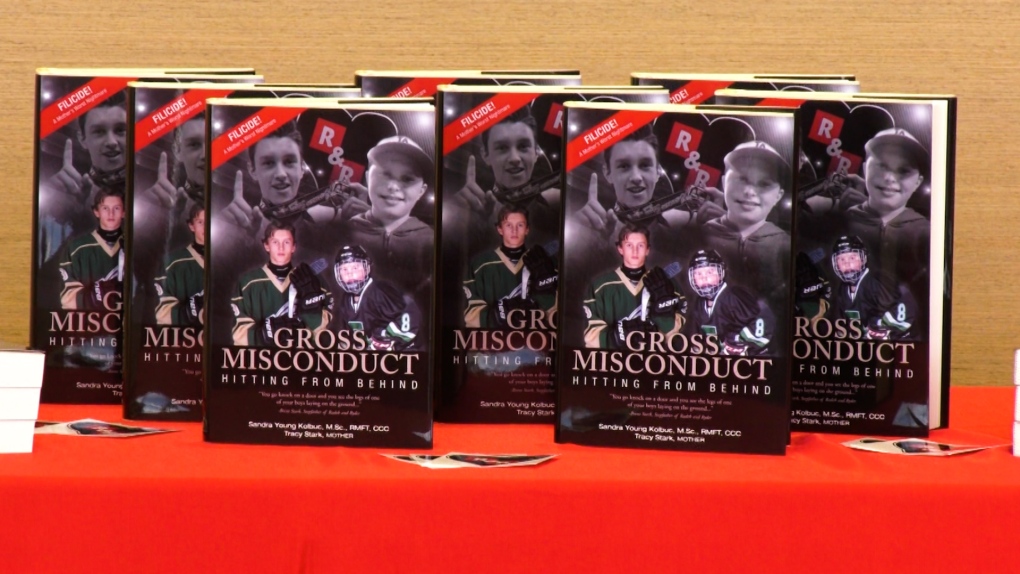 The book Gross Misconduct: Hitting From Behind at a launch event in Edmonton on Saturday May 14, 2022. (CTV News Edmonton)

Two Alberta authors are hoping their book can help raise awareness of domestic violence in Canada and help prevent future tragedies, like the one that prompted them to write the book.

Gross Misconduct: Hitting From Behind was written by Tracy Stark and her therapist Sandra Young Kolbuc.

The book chronicles Stark’s experience through divorce, custody battle and the murder of her children by their biological father in 2016.

“We’re telling the story and all the emotion that comes with it and all the wonder of people who were there to support Tracy and to try and make a difference, not just in building more women’s shelters, but in changing the culture of violence,” said Kolbuc.

“It is a very hard read, it’s very raw, it takes you on a journey… when I found the boys… murdered by their father and then the journey I went on with my boys,” added Stark.

“A lot of the readers, they’ve told me they can… they feel my pain, they lived the exact same life I lived and I feel like it’s a bible, people are going to read it and hope to god that their outcome is a lot better than mine.”

In 2019, Stark approached Kolbuc to co-author the book and it released in February.

“We’d have to take breaks because we were dealing with some really vivid memories… we had to work through that… and I think through that whole process we were really able to work well together to bring this story into the world,” said Kolbuc.

On Saturday and Sunday the pair are at Wolfe Cadillac, meeting readers and supporters and signing books.

“It’s a gratifying emotion, meeting so many people. I told myself I wasn’t going to cry at all and I’ve cried three times,” said Stark. “It’s just so nice to see the support and the support that’s been with us pretty much since the boys died.

“I just want to thank everybody that’s walked our path with us since day one and never left our side, I’m here because of you.”

The book also touches on what it calls failures in Canada’s legal systems that need to eb addressed to protect women and children.

“There were systems that failed her and naturally we want people in positions of influence to look at these laws and look at these procedures and policies,” said Kolbuc. “We want women and the men who love them to stand up and say there needs to be a change and for this to happen we want people to start having conversations.

“Tracy made a promise to her boys that their lives were going to make a difference, the day they died she made that promise to them.”