EDMONTON -- The Alberta government is facing both skepticism over the premier's claims he didn't know elected officials were leaving Canada, and frustration within the United Conservative Party over those colleague's actions.

"They're not in a great spot."

He believes the number of government insiders – at least nine – who ignored Alberta's advisory against international travel suggests the party has an internal policy problem.

"Somehow, something happened in caucus and people thought they had options. Or they thought they could get away with it," Marciano proposed.

In Kenney's last media briefing, and again in a statement Monday announcing the reduced roles of seven public officials and staff, he attempted to take responsibility by saying his directive hadn't been "clear enough."

He has also said he didn't know any MLAs or ministers were travelling abroad until the last week of December.

A former municipal affairs minister is challenging that.

"He knew they were gone," said Doug Griffiths, who served four terms as an Alberta MLA until 2005.

"When a minister leaves, there's (sic) records of it and another minister has to be held to account." 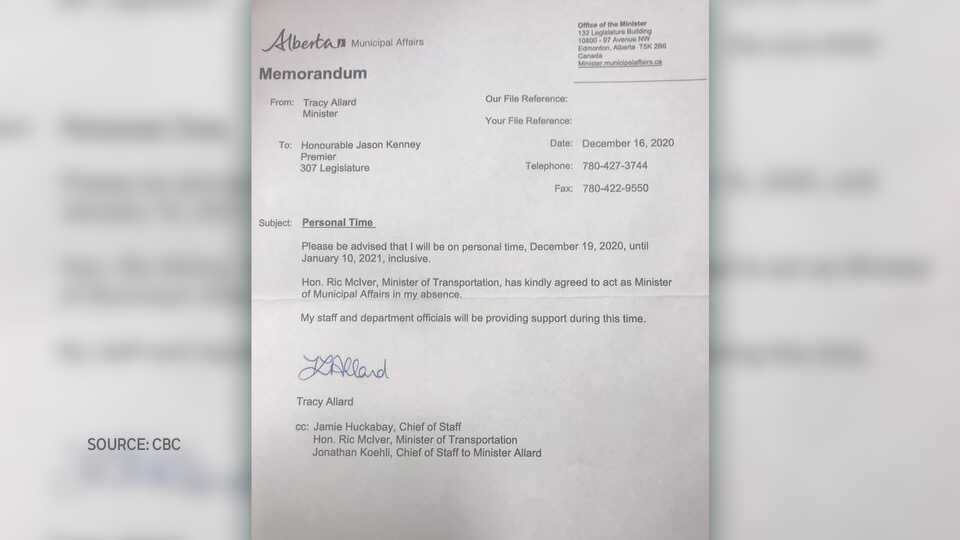 The memorandum, dated Dec. 16, cc'd the chiefs of staff of Allard and Kenney, as well as Transportation Minister Ric McIver, who was supposed to take over Allard's file until Jan. 10.

However, director of government communications Christine Myatt said despite the letter being addressed to Kenney, it goes to his chief of staff.

"The Premier did not see the memo in question. It was never brought to his attention by political staff. As was said previously, the Premier was not aware of then-Minister Allard's travel plans."

Myatt called the paperwork routine notification, emphasizing it was not a request for approval and did not outline an itinerary or location.

Allard and her family flew to Hawaii on Dec. 19 and were there for 10 days.

'WE DIDN'T GET IT RIGHT': MCIVER

In his last press conference, the premier said he didn't "have a comprehensive list" of government members who had travelled in December. On Tuesday, his principal communications person said a list still did not exist but that "the names of those elected officials are now all publicly known."

According to a University of Alberta political scientist, the situation has left a crater in the government's credibility.

"How does Premier Kenney now have the moral authority to step up in front of a podium and lecture Albertans about what's right and wrong?" asked Jared Wesley.

McIver thanked those who had been "yelling" at him: "There is no doubt in our mind we didn't get it right."

He was sworn in as interim municipal affairs minister that same day.

Shandro apologized, but said he could not yet ask for forgiveness.

"I think what we can ask for at this time, or what I'm asking for, is patience. There was over a million Albertans who voted for us because we campaigned on hard work and humility and some folks from our team forgot about that last part."

Alberta's top doctor asked for compassion, as she frequently has during the pandemic.

"Today like every other day, I'm going to say that I absolutely can understand that anger. I also know that all of us, all Albertans, are really sick and tired of COVID and sometimes that leads to lapses in judgement."

She asked the public to take a deep breath and look to her office's health orders and guidance as a roadmap.

Shandro said despite his frustration, the orders "are working… Thank you of these sacrifices."

But many Albertans have shared a 2019 campaign tweet from Kenney promising MLA recall legislation. The link no longer works.

In Lesser Slave Lake, town council publicly asked for MLA Pat Rehn's resignation, claiming he missed and was ill-prepared for meetings and that his December trip to Mexico wasn't the only time he was spending away from the region.

"Some people might be threatened with recall," Marciano speculated.