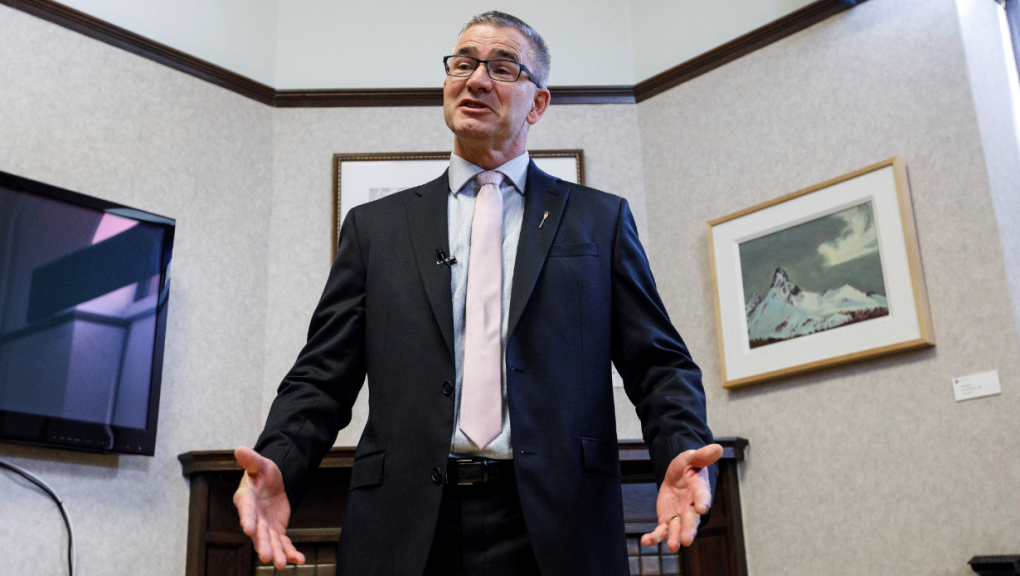 "I'm wearing these boots again because the work continues," Toews said. "There continues to be heavy lifting in front of us as a province."

Toews, who was elected MLA of the year by his peers in December, echoed Lt.-Gov Lois Mitchell's throne speech that the new budget will continue to focus on creating jobs and improving the economy.

"Budget 2020 is year two in that four-year fiscal plan," the finance minister said. "Obviously they'll be some adjustments. We'll be putting a real focus in job creation."

Last October, the UCP introduced an annual one per cent reduction in corporate income tax, from 12 to eight per cent through 2022.

"We believe and know that real work creation, sustainable job creation, comes from the private sector and to achieve that we have to attract investment back into this province," Toews said.

The government also pledged $6.4 billion towards its 2020 Capital Plan with the goal of boosting infrastructure..

Toews hinted there would be more public sector cuts in Budget 2020, but asserted the UCP has been "very transparent" about that

"We were very clear in Budget 2019 that there would be a reduction in the size of the budget service … so again, we will continue with the general premise and plan," Toews said.

"In the future three years there will be some continued job reductions in the public sector. The vast majority of those will be through attrition, but we have been very transparent about that."

Among the other things to watch for on budget day is direct investment from the province into Alberta's energy industry following comments earlier this week from Premier Jason Kenney, who referenced the days of Premier Peter Lougheed in Tuesday's throne speech.

“Alberta is prepared to invest directly and support companies and Indigenous groups, when necessary, to assure the future of responsible resource development,” reads the speech.

Previously, the UCP has relied on tax and business incentives to aid Alberta energy projects.

Kenney told reporters that the government has at least one investment in mind and is willing to consider others, but declined to give specifics ahead of Budget 2020.

Lougheed’s government bought Pacific Western Airlines, then a major carrier, for $36 million in 1974. The purchase resulted in some small profits until the province sold it off nine years later.

The province bought a part of oil company Syncrude in the mid-70s and made handsome profits until selling off its shares in the 90s. The Alberta Treasury Branches has evolved from its Great Depression roots into its current form as a financial institution used for daily banking by thousands of Albertans.

But others have been boondoggles, including massive losses on tech company NovAtel and the MagCan smelter in High River.

Earlier this month, the province announced a series of changes to how it funds education, including moving away from the current per-student funding model.

Instead, school grants will be determined by a weighted, three-year average that the province says will allow it to determine district funding by the spring before the start of the new school year.

The government says the changes will result in all Alberta school divisions seeing an increase in operation funding for the next school year, but isn't releasing funding details until the 2020 provincial budget is tabled.

A recent review of Alberta Health Services recommends cuts aimed at saving between $1.5 billion to $1.9 billion a year.

“Every dollar we save will be put right back into the health system to deliver on our promise to improve access and make the system work better for patients," said Health Minister Tyler Shandro.

The province estimates it’s spending $20.6 billion on health this year, which is 40 per cent of the provincial operating budget.

The province has pledged not to reduce its health care spending, but tomorrow’s budget will outline a reallocation of dollars in line with the government's fiscal goals.

Budget 2019 also promised a tax on short-term rentals offered through online marketplaces like Airbnb and VRBO.

The move will come into effect for 2020-21 and is expected to raise about $5 million in revenue per year, according to the last provincial budget.

Thursday’s budget will include details on the rate and what properties will be taxed.

Edmonton city council is debating its own set of bylaw changes to apply to short-term rentals with a decision expected next week.

Budget 2019 said it planned to introduce a tax on vaping products for this fiscal year.

The government didn’t provide many details beyond that, meaning we don’t know exactly what vaping-related products will be taxed and at what amount.

The tax is part of the province’s review of the Tobacco and Smoking Reduction Act which aims “to address the recent increase in vaping, smoking, and tobacco use.”

The tax is expected to generate a modest $10 million annually, according to the last budget.

CTV News Edmonton will have full coverage of Alberta Budget 2020. Visit CTVNewsEdmonton.ca on Thursday, Feb. 27 for news, analysis and video from budget day at the legislature.