EDMONTON -- A rogue tire flew off a trailer travelling at high speed, then collided with a light pole hard enough to send it crashing down on top of an Edmonton couple's truck—shattering the windshield.

The couple now says they're lucky to be alive after they were caught up in the unbelievable chain reaction.

"A tire come off a trailer...that was travelling in the same lane in front of us," said John Oxton, who was driving on the Yellowhead Trail.

The close call happened near the 184 Street onramp on Saturday afternoon when the tire came off of what Oxton describes as a one or two-tonne truck with a flatbed or gooseneck trailer.

Oxton says he was driving about 80 kilometres per hour with his wife in the truck at the time of the incident.

He wants to know why the light post came down so easily and what happened to the truck.

"Boom. It hit our windshield," he said. "We were covered in glass."

A City of Edmonton spokesperson said the city is aware of the incident and has initiated an assessment of required repairs and notes that poles are designed to withstand winds of up to 160 kilometres per hour.

The tire and light pole remain in the ditch near the side of the Yellowhead.

Oxton is hoping anyone who witnessed the near hit or has dashcam footage to let police know. 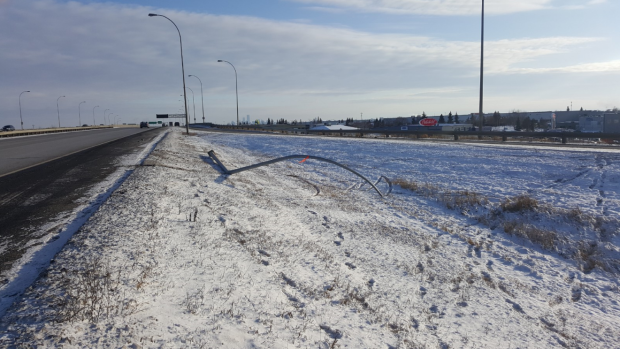