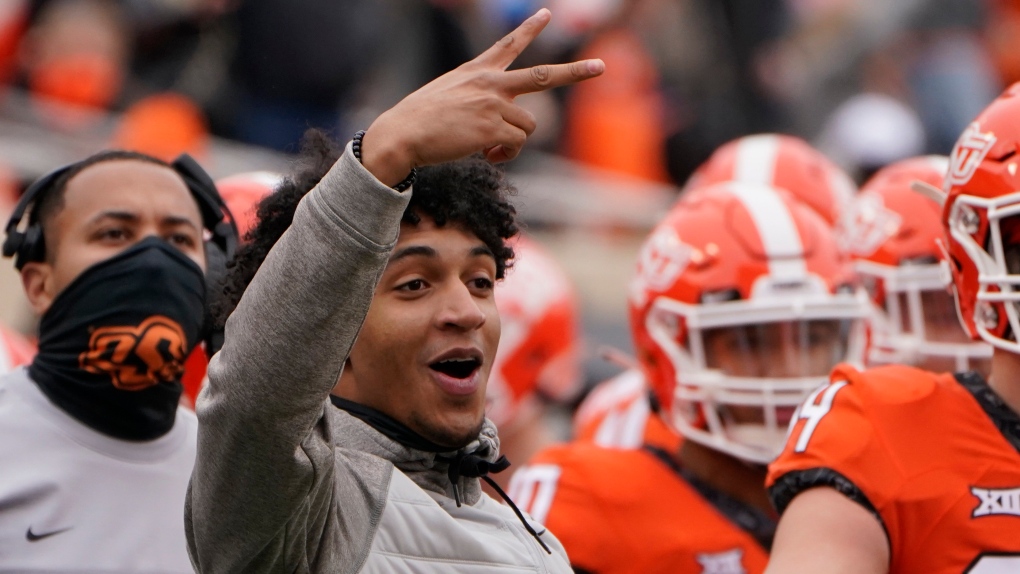 EDMONTON -- Sherwood Park and Oklahoma State running back Chuba Hubbard will leave college and head for the National Football League, according to comments from his head coach Mike Gundy.

Gundy told the Oklahoma State pre-game radio show that Hubbard  has "chosen to go to the NFL."

Hubbard, 21, has not confirmed his plans, but may do so after the Cowboys game this afternoon. He has "opted out" for the remainder of the season, according to multiple local media reports.

The Cowboys are scheduled to wrap up the regular season today on the road against Baylor.

He was eligible to declare for the NFL draft last season but elected to return to Oklahoma State for his redshirt junior season. He has one year of college eligibility remaining.

Hubbard has struggled this year with 133 carries for 625 yards and five touchdowns in what has been an injury-plagued season.

The star runner has sat out the team's last two games with a leg injury and will also miss today's season finale.

Given his pro prospects, he may have played his last game with the Cowboys on Nov. 21, a 41-13 defeat to rival Oklahoma.

It's been a disappointing season for the Cowboys, who were expected to contend for the Big 12 championship this year, but have lost three of their last five outings. Oklahoma State was 6-3 entering Saturday's game against Baylor.

He also became only the fourth Canadian and first Albertan to receive votes for the Heisman Trophy.

In May, he received the Jon Cornish Trophy as the top Canadian in the NCAA football ranks and opted to remain at Oklahoma State rather than declare for the 2020 NFL draft.

Hubbard publicly spoke out against Gundy in June after pictures surfaced on social media of the coach wearing the T-shirt of a far-right media outlet.

“I will not stand for this,” Hubbard said in a Twitter post. “This is completely insensitive to everything going on in society, and it's unacceptable. I will not be doing anything with Oklahoma State until things CHANGE.”

The pair later appeared in a video where they shook hands and hugged.

“I'm looking forward to making some changes, and it starts at the top with me, and we've got good days ahead,” Gundy said in the video.

Hubbard apologized for taking to social media instead of speaking to Gundy directly, but later tweeted “No don't get it twisted. Foot's still on the gas. Results are coming. It's not over.”

Hubbard's draft position is difficult to project given both his stellar 2019 campaign and struggles in 2020.

Despite being the sport’s most prolific rusher in 2019, Hubbard wasn’t considered a likely first round NFL draft selection.

Last year, draft experts had Hubbard as being selected between the second and fifth rounds as anywhere between the third and sixth running back selected.

His pro potential is bolstered by his eye-popping stats and sprinter's speed. He was also the focal point of the Cowboys offence over the 2019 season's final weeks when injuries kept the team's starting quarterback and top wide receiver on the sidelines.

In 2019, 25 running backs were drafted by NFL teams, but only two were selected before the third round. Fifteen of the 25 were taken in the fourth round or later.

ALBERTANS IN THE NFL

Hubbard could  be the first Alberta born and raised player to play in an NFL regular season game since 2013.

Former University of Alberta Golden Bear Carter O'Donnell was signed by the Indianapolis Colts last fall. The offensive tackle hasn't yet appeared in a game but remains on the team's practice roster.

Fellow offensive tackle Daniel Federkeil was born in Medicine Hat, attended the University of Calgary and also later signed for the Indianapolis Colts where he was part of the team that won Super Bowl XLI in 2007.

Before that, punter Hank Ilesic ( 1989) and receiver Brian Fryer (1976) both had brief NFL stints in San Diego and Washington respectively after both growing up in Edmonton.

With a file from the Associated Press