Despite Edmonton experiencing its coldest February in 40 years, sports fields will be ready on schedule.

“We had a fair amount of snow on the top which created an insulation for the turf, so we haven’t seen too much damage compared to other years,” said Olivier Le Tynevz-Dobel, supervisor with Sports Fields and Turf Strategy at the City of Edmonton.

“If you look at the field right now it is pretty green compared to last year and way less damage on the grass,” he added.

The city has 350 people working to prep and maintain more than 1,600 sports fields throughout Edmonton.

“We are planning on opening the fields on April 29,” said Le Tynevz-Dobel.

He said marking will continue over the next two weeks and the city plans to upgrade seven ball diamonds from grass to shale.

“Most of our work right now is about looking after the sites and ensuring that premium sports fields that are bookable for April 29 will be ready and open.”

The city is also making the switch to electric equipment which Le Tynevz-Dobel said is quieter, safer, and more cost effective.

The field at Coronation Park will also be the test site of a $30,000 new electric mower. 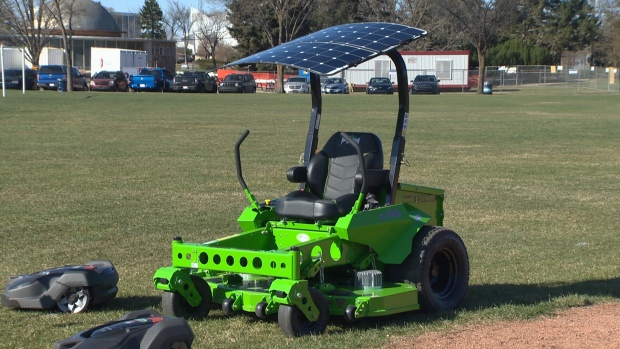 “With three large batteries and there is no fuel or any oil within this equipment,” Le Tynevz-Dobel said.

He said it’s capable of operating a full eight hours on a single charge.

“And it takes about 11 hours to charge so it will totally work with our programs that we have in place.”

With files from Regan Hasegawa…