“These adult individuals are self-isolating, and I want to express my appreciation for their assistance with contact tracing and investigation,” she said.

Monkeypox is spread through skin-to-skin contact, or by touching things contaminated by the virus like clothes or bedding.

Symptoms of monkeypox include fever, swollen glands, sores, or a rash.

Hinshaw said that anyone who experiences monkeypox symptoms should self-isolate and call 811.

“These are common symptoms and most people with these symptoms will have another cause. However, being aware of these symptoms is particularly important for anyone who has had a new sexual partner,” Hinshaw said.

Hinshaw noted that the majority of monkeypox cases that have been recorded worldwide have been in the gay community. She says Alberta Health has reached out to organizations across the province that serve the LGBTQ2S+ community to provide them with information.

“This is not being done to shame or stigmatize anyone, and it does not mean that anyone who has contracted monkeypox or is a contact has done anything wrong,” she said.

Rob Browatzke is a co-owner of Evolution Wonderlounge, a gay bar in downtown Edmonton. He says he was surprised to receive an email from Alberta Health about monkeypox earlier this week. 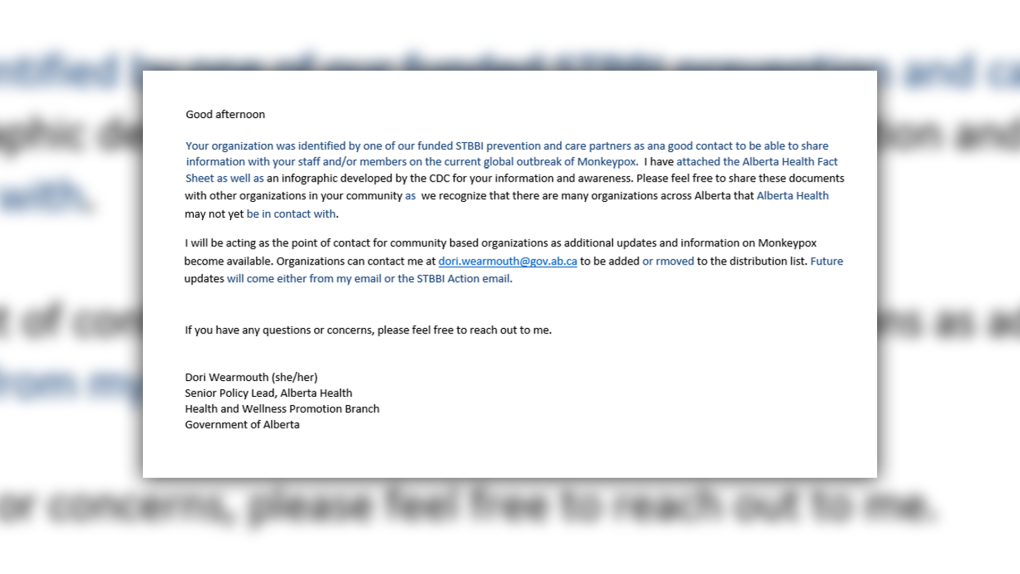 “I wrote back and asked if it was going to all nightclubs or if it was just going to gay bars and I haven’t heard anything back yet,” he told CTV News on Thursday.

“If monkeypox is transmissible by certain behaviours, then that should be going everywhere. We’re certainly not the only nightclub where people are going to hook up.”

“I’m very sorry that that particular fact sheet caused that, that was certainly not the intent,” she said. “We did try to get feedback from several organizations about the wording and the language, and did our best to balance the need for timely dissemination of accurate information with the consultation of several representative groups.”

Browatzke worries that tying monkeypox to the gay community will reinforce harmful stereotypes.

“If people are already predisposed to think that gay sex or gay people are dirty or disease carriers, this is just going to reinforce that kind of harmful ignorance,” he said. “And that this is happening during Pride month is just astounding. I’m like ‘Come on government!’”

“We are continuing to engage with organizations and welcome their feedback and if there are ways that we can speak about this in ways that provide accurate information about risk factors so that people can take control over their own health without stigmatizing, we absolutely welcome that feedback,” Hinshaw said.

She added that the risk of contracting monkeypox in Alberta remains low.

Rescuers raced against time early Wednesday to pull survivors from the rubble before they succumbed to cold weather two days after an earthquake tore through southern Turkiye and war-ravaged northern Syria. The death toll climbed above 7,700 and was expected to rise further.

From $55 to $130: Which Canadians plan to spend the most this Valentine's Day?

As Valentine's Day approaches, many Canadians are preparing to celebrate by taking their loved ones to dinner and buying them gifts, but how much are we spending on this day coast to coast?