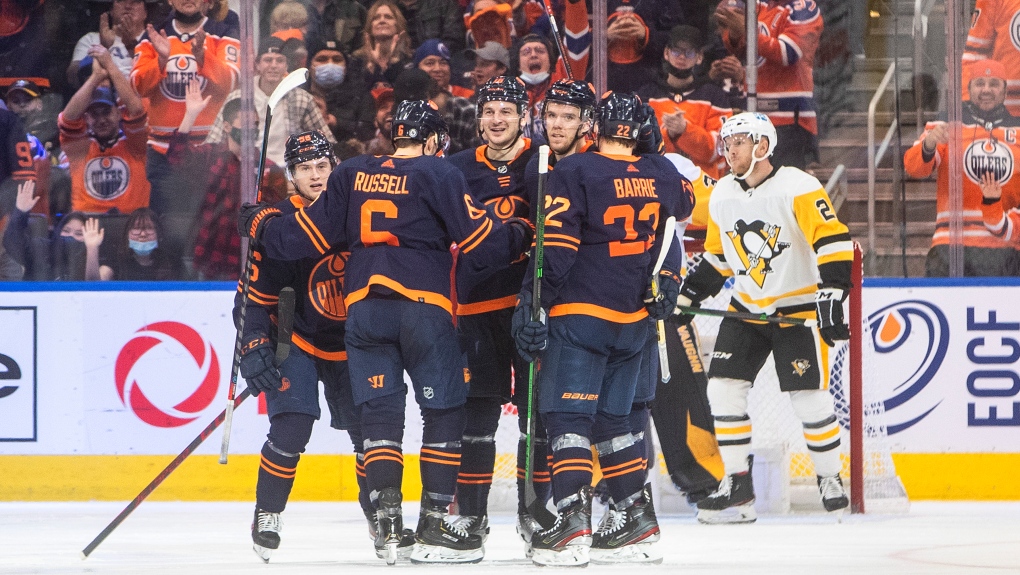 Down four defencemen and outshot and outplayed for the bulk of the game, the Edmonton Oilers were still able to earn a big win over the Pittsburgh Penguins.

Connor McDavid had a goal and three assists and Zach Hyman had two goals as the Oilers stole a 5-2 victory over the Penguins on Wednesday.

Kailer Yamamoto and Evan Bouchard also scored for the Oilers (16-5-0), who won their third game in a row and improved to 9-1-0 on home ice, despite getting outshot 34-22.

“We kind of held on for the first 40 minutes,” said McDavid of being doubled 26-13 on the shot clock after two periods. “Mikko (Koskinen) did a great job as usual and I thought our young defencemen did a good job stepping in and trying to keep the game simple, keep the game in front of them.

“We kind of worked our way through the game and capitalized on our chances and got some timely saves.”

“We can be better,” said Tippett. “We can be cleaner with the puck and harder on loose pucks. We were in the third, but I'd like to see it for 60 minutes.”

Jake Guentzel and Teddy Blueger responded for the Penguins (10-8-5), who have lost three straight.

“We just make a few mistakes and it ends up in the back of the net,” said Pittsburgh's Sidney Crosby, who was held to an assist. “We had some good pressure, some good zone time for most of the night and you give them any opening and they take advantage of it.”

Edmonton started the scoring seven minutes into the opening period as Hyman picked the top corner past Penguins starter Tristan Jarry. The Oilers came into the game with an 8-0 record when recording the first goal.

Pittsburgh tied the game back up with five minutes left in the first when Guentzel unleashed a one-timer that Koskinen couldn't get across the crease to stop. The goal extended Guentzel's point streak to 11 games.

McDavid elected to pass on a two-on-one, setting up Hyman's second of the contest and 11th of the season a minute later as Edmonton retook the lead.

A minute into the second period, Blueger beat Koskinen high to the blocker side after taking a nice feed from Evan Rodrigues to tie the game 2-2 for Pittsburgh.

Edmonton made it 3-2 three minutes into the third as Yamamoto deftly deflected a long Tyson Barrie shot into the net.

McDavid earned his third assist of the game playing four-on-four eight minutes into the third as he threaded a pass through to Bouchard for an easy tap-in on another two-on-one opportunity.

The hats came raining down with nine minutes left in the third as it appeared Hyman had scored his first-ever hat trick, but a video review determined the play was offside.

“Eventually it will happen,” Hyman chuckled. “It was fun almost getting a hat trick there.”

Edmonton put the game away on a McDavid empty-netter, unable to get it to Hyman on the play.

The Oilers make a quick one-game trip to Seattle on Friday, while the Penguins head to Vancouver to face the Canucks on Saturday.

This report by The Canadian Press was first published Dec. 1, 2021.

Police say a series of stabbings in the downtown core last month have been determined to be hate-motivated and targeting vulnerable Calgarians.

Spotify is removing the discography of Canadian rocker Neil Young after he demanded it be taken off the platform over concerns with its connection to vaccine misinformation and comedian Joe Rogan’s podcast.