Edmonton weather for April 27: A bit cooler with an evening precipitation risk 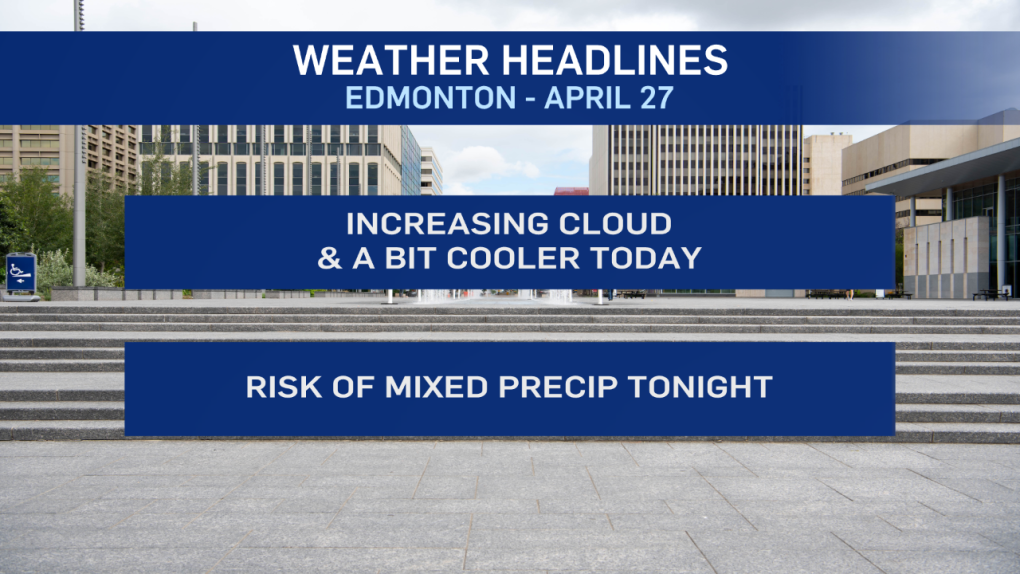 EDMONTON -- A slightly cooler day in Edmonton with temperatures getting to a high in the 7 to 10 degree range.

Some sunshine this morning will give way to increasing clouds this afternoon and there's a risk of some showers turning to wet flurries tonight.

It doesn't look like Edmonton and areas to the south will see a significant accumulation.

But, we've likely had 5 to 10 cm of snow in areas from Peace River southeast towards Bonnyville overnight.

That same zone will get a bit of a break today and then another shot of snow pushes through many of the same areas tonight.

We'll be watching the position of that cold front through the day.

IF it were to start slumping a bit further south, then that could put the accumulating snow closer to Edmonton.

As of now, it doesn't look like the front is going to move much.

Another chance of precipitation comes through the Edmonton region Thursday morning, this time in the form of showers or rain.

Given how dry it is, we could certainly use the moisture (in either form).

Temperatures will rebound to the 10 to 13 degree range Wednesday.

We'll be in the upper teens in Edmonton Thursday and a high near 20 C is on the way for Friday.

The early outlook for the weekend has partly cloudy skies, morning lows staying above zero and afternoon highs in the mid teens.

Wednesday - 60% chance of flurries early in the morning. Cloudy with sunny breaks in the afternoon.

Friday - Mix of sun & cloud. Increasing cloud in the evening with a 40% chance of an evening shower.