Edmonton weather for July 27: The heat's set to make a return visit 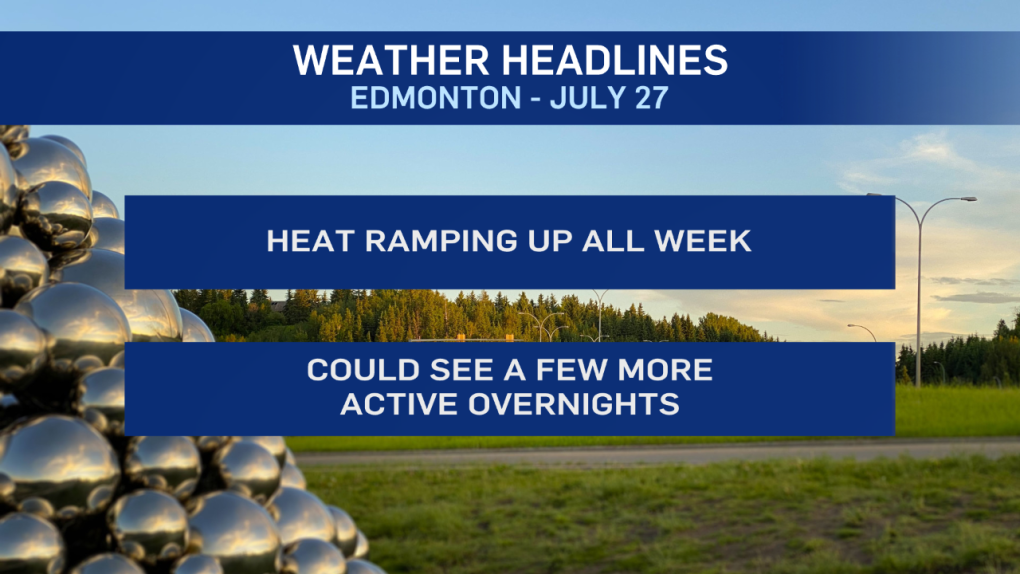 Daytime highs will be in the mid 20s today, upper 20s tomorrow and right around 30 (or into the low 30s) for Thursday-Sunday in Edmonton.

More on that in a moment... first let's talk about today:

Parts of the Edmonton metro region were awakened by an early-morning thunderstorm that pushed through northern parts of the area.

The storm hit the Stony Plain region around 2 a.m. and then crashed through North Edmonton and St. Albert before hitting Fort Saskatchewan around three o'clock this morning.

Edmonton was on the southern edge of that area of rain and lightning stretched all the way north to Athabasca and that system is dumped some rain on the Lac La Biche/Bonnyville regions this morning before moving into Saskatchewan.

Given the way that parts of that system looked on radar, I wouldn't be surprised if a few spots had some hail. But, powerful gusts and heavy rain seem to have been what affected most people in the storm's path.

Those are expected to move east and shouldn't get anywhere near Edmonton.

We DO have a slight risk of a shower in or near the city overnight.

Areas further south have a chance for some nocturnal thunderstorms.

AND...Wednesday night (late/overnight) also has the potential to bring a shower or thunderstorm to the Edmonton area.

The daytime hours looks dry for the next few days. Morning clouds will give way to afternoon sun today, tomorrow AND Thursday.

Mainly sunny and hot for Friday and the weekend.

Provided the smoke continues to steer clear of the area, we'll have highs in the 28 to 33 degree range Thursday-Sunday.

It looks like Saturday and Sunday will be the hottest days, but we'll have a shot at hitting 30+ on four consecutive days (Friday through Monday).

We're still a few days out, and a shift in wind could blow smoke in and force us to drop our forecast highs.

But, if the outlook holds, we'll likely see another Heat Warning issued before the end fo the week.

30% chance of an evening shower or thunderstorm.