Edmonton weather for May 27: Up today, down tomorrow and then up, up, up 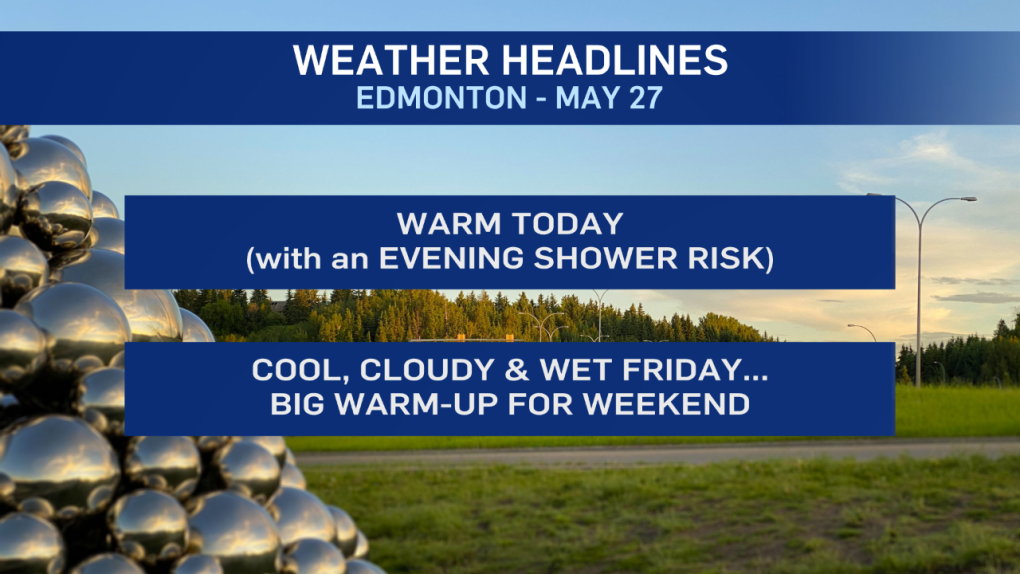 EDMONTON -- Temperatures are back into the low 20s in Edmonton today after ALMOST getting to 20 yesterday (high of 19.8 C in the city Wednesday).

Most of the province is set to be a few degrees warmer today.

Everyone takes a turn for the cooler Friday as clouds dominate and heavy, steady rain hits parts of northern and north-central Alberta.

There's a low-pressure system that'll move up towards Edmonton today and then stall out to the north of the city.

It just kinda gets stuck for a day AND there's an upper low stacked on top of it by Friday.

SO...it's going to dump a good amount of rain on some areas. The exact location is still TBD - but, areas around Slave Lake northeast towards Fort McMurray look most likely to see 30+ mm.

A larger area from Grande Prairie north to High Level and east to Lac La Biche could see 15-30 millimetres.

Areas along and south of the Yellowhead will likely only get some showers (and probably some thunderstorms further south).

So, rainfall amount estimates for areas like Edmonton, Whitecourt, Vegreville, etc. are really tricky and (in my opinion) not worth offering up.

If it's just showers, you could easily get a spread of 0 to 15 mm in different parts of the city.

If a steadier band of rain moves in from the north later in the afternoon, you could get 10 to 20 mm more evenly spread.

So, if you're in Edmonton...don't worry too much about HOW MUCH rain.

We'll probably get a bit of sun EARLY Friday morning, then the clouds will increase mid to late morning.

Edmonton hits a high near 15 degrees around lunch time and then it's overcast with a VERY GOOD chance of showers and/or rain in the afternoon with temperatures falling to around 10 degrees.

More sun than cloud through the weekend with a high near 20 C on Saturday and into the mid 20s Sunday.

The first half of next week is still shaping up to be hot, with highs in the 25 to 30 range.

Tonight - Mostly cloudy. 40% chance of a shower or thunderstorm this evening.

Friday - Increasing cloud in the morning. Cloudy with a 60% chance of showers or periods of rain in the afternoon.

Temperatures peaking around Noon and then cooling through the afternoon.