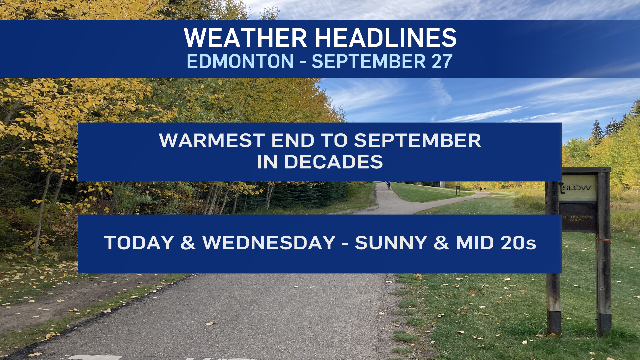 We won't be setting any records for daytime highs this week. But, we WILL do something that hasn't been done in more than half a century.

The last six days of September will all have daytime highs above 20 C in Edmonton.

I stopped looking at the stats once I got to 50 years, so it may be something we've never done.

But...we'll do it this year. Temperatures are forecast to hit the mid to upper 20s today and Wednesday.

Thursday/Friday will drop into the low 20s (still a handful of degrees above the average high of 15 C).

AND...we'll probably keep the 20-something highs through the weekend as well.

Here's another "history-making" aspect to this week: THREE days with highs 25 C or hotter in the last week of September.

THAT is something we haven't done (in the last week of September) since 2001.

Increasing cloud in the evening.

Slight risk of a shower overnight.

The head of NATO expressed worry that the fighting in Ukraine could spin out of control and become a war between Russia and NATO, according to an interview released Friday.

Tabloids fume, many in U.K. shrug over Harry and Meghan series

Britain's press erupted in outrage Friday at Prince Harry and Meghan's documentary series, which lambasts the U.K. media over its treatment of the royal couple.

CTVNews.ca speaks with victims of stalking and harassment, and with advocates and legal experts who are calling on Canada to overhaul how it handles these cases from the police, to courts, and to the communities we live in.

A Black-owned yoga studio in Ontario is closing its doors due to thousands of racist and violent messages on social media.

Canadians sending parcels this holiday season may be surprised to see a steep surcharge on domestic shipping due to the high price of diesel.