First ‘extraordinary’ snake embryo fossil found: U of A study

An ancient snake provided scientists with important new information on the evolution of the modern reptile.

The snake embryo has been preserved in a 105-million-year-old amber and researchers believe it is the first snake of this type to be found.

University of Alberta paleontologists worked with international scientists to study the ancient embryo, which was discovered in Myanmar.

“To actually have something as fragile as a baby that’s only a few millimeters long preserved for a 100 million years, the amount of new scientific information that we can get from it is quite extraordinary,” Tiago R. Simones with the U of A’s biological sciences department said.

The ancient embryo was studied using CT scans because there is currently no technology available to remove the amber while keeping the fossil intact.

The amber provided new insights into how the embryo developed, including its formation of the vertebrae and notochord.

Scientists learned the way this ancient snake developed is similar to modern snakes.

“This indicates that the mode of development of snakes seems to have been quite constant since a hundred million years ago until today. They haven’t changed much in how they develop, in how they ossify their bones,” Simones explained.

He noted ancient adult snakes are different from modern ones, because fossils show they used to have limbs millions of years ago. 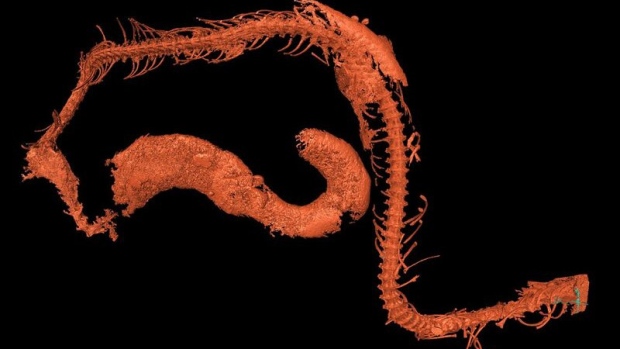 Researchers said the snake is related to ancient snakes from Argentina, Africa, India and Australia, and is a missing link in understanding how they migrated.

“We need to learn that snakes that were so abundant in the southern hemisphere reached up to the northern hemisphere and this specimen helped us to answer part of that question,” Simones said.

Researchers have tracked the migration of these Gondwanan snakes and discovered they were carried by tectonic movements of continents 180-million years ago, when they relocated from Australia and India, to Madagascar and Africa, and finally to Asia in modern-day India and Myanmar. 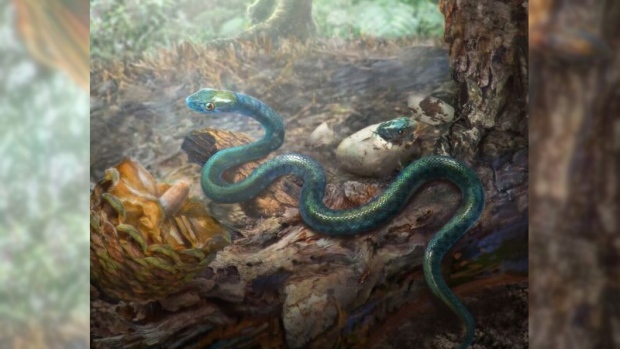 Various insects and plants were preserved in the clast, showing the snake lived in a forested environment.

Simones said this is the first strong evidence that snakes lived in those environments when dinosaurs roamed the earth, highlighting the need that more research needs to be done.

“It indicates how little we know about ecological diversity in that point in time of snakes. We thought snakes were living in arid environments, marine environments, but they had much boarder range of ecological roles than we previously thought.”

The study, “A Mid-Cretaceous Embryonic-To-Neonate Snake in Amber from Myanmar,” was published in Science Advances.

This research was conducted in collaboration with the China University of Geosciences, the Institute of Zoology at the Chinese Academy of Sciences, Midwestern University, the South Australian Museum, Flinders University, the Royal Saskatchewan Museum, the University of Regina, the Paleo-Dairy Museum of Natural History and the Beijing Forestry University.

With files from Shanelle Kaul