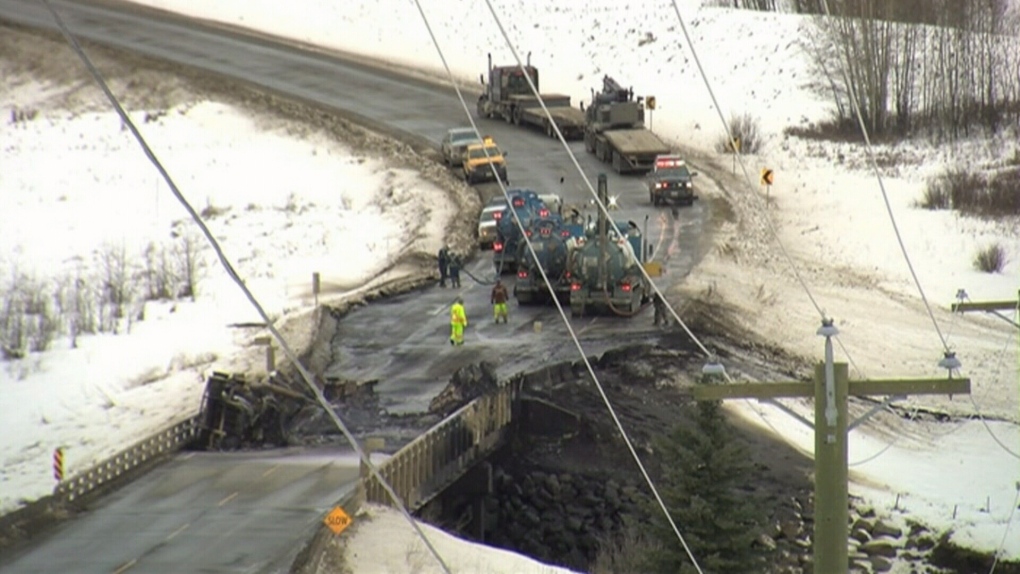 The Highway 49 bridge over the Pouce Coupe River just west of the Alberta-B.C. border saw one lane reopened Monday, Nov. 18.

EDMONTON -- One lane has been reopened on Highway 49 at the site of a Saturday crash and fire involving a B-train truck carrying crude oil.

The roadway was closed after the incident, and at the time, officials said it would not be reopened until an engineer could assess it for safety.

Although a lane restriction was put in place, Highway 49 reopened just before 1 a.m. Monday.

However, the bridge's damage assessment continues, along with cleanup in the area.

"Right now, there's some discussions on how the cleanup and possible replacement of some of the rip-rap around the bridge is going to happen," explained Alan Stebbing, an environmental emergency response officer with the B.C. government's emergency management department.

The incident saw 40,000 litres of product spilled at the location and into the Peace Coupe River, although the majority was burned in the ensuing fire, the B.C. government said over the weekend.

An absorbent boom that was placed in the river Saturday was replaced the next day by a containment boom, which crews used with a disc skimmer to collect oil, Stebbing said.

"It's always easier to keep the oil in one place and deal with it than be trying to chase it down the river."

Excavators were also brought in to dig up contaminated soil.

"We did fly the river, (a) fair way's down the stream, and actually stopped and did water samples by the Landry Bridge to make sure we got confirmation that there was no impact that far down," Stebbing said.

Cleanup will continue throughout the week.

Stebbing said B.C. would be working with local governments and environmental groups to take next steps.

The truck's driver was taken to hospital after the crash. His current status is unknown.