'How am I supposed to mow the lawn?': Siblings laugh at unusual internet hookup

An interesting internet installation has left a pair of Edmonton renters scratching their heads.

Siblings Matt and Marissa Karpiak have been waiting for months to get their internet set up.

They moved into their rental in central Edmonton in December 2018. They originally had Telus internet, but decided to make a switch to a third-party internet provider.

Marissa bought their internet package through a reseller, but they had to wait for Shaw to send out a technician to install it, as the company facilitates installation of internet services leased by resellers.

Their first technician came in the winter. After searching for a way to connect the cable he found that the box was frozen in sub-zero temperatures, the Karpiaks said. Unable to connect the internet, he left and said there would be a follow-up.

When the follow up didn’t happen, the Karpiaks continued using their Telus internet that they hadn’t cancelled, but they were now also paying for the internet that wasn’t hooked up.

After being sent back and forth between the reseller and Shaw, they cancelled their Telus internet and finally got another tech sent out to their place.

Marissa said a technician showed up to the house around noon on Thursday. The tech asked her where she wanted the modem and router.

“I said ideally we’d like it in the office, or if we have to, the living room in the basement.”

The tech went to work, and Marissa left for her shift. The siblings’ father was at the house while the two were at work.

Marissa got home from work and said she went into the office and saw their old Telus router still plugged in, but no new equipment.

“I went downstairs and found it on our washing machine, and was like, ‘Why is it here?’” 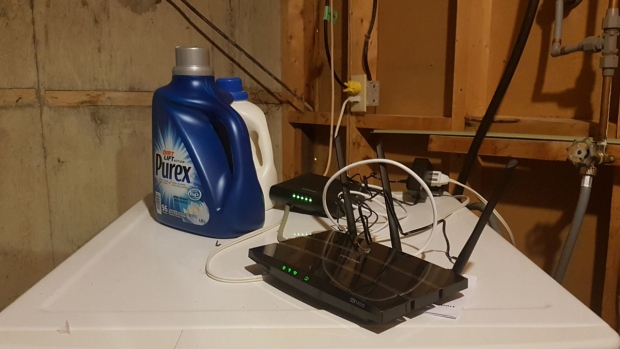 When Matt got home later that night, Marissa sent him to the backyard to take a look at the work that was done.

An internet cable stretched across the middle of their lawn, connected to a box at the bottom of a lamppost. According to the Karpiaks, the technician said it was because there was no other access box nearby.

“I just started laughing,” Matt said. “I’m happy we have internet. But how am I supposed to mow the lawn?”

Matt posted a video to Facebook, with many friends expressing their disbelief at the unorthodox internet setup.

“Is this you getting free internet from the neighbour?” one commenter asked.

The siblings are taking the situation in stride, but are seeking answers.

“I just want to know why he set it up this way,” Marissa said. “There could’ve been a good reason, but I don’t think this is the best way it could’ve been done.”

Later Friday, a Shaw Communications spokesperson provided a statement to CTV News Edmonton saying the company was aware of the pair’s concerns over the internet cable.

“In situations where a temporary cable line is required, our technicians are instructed to hide these lines as best as possible. From there, our technicians work with our operations teams to later complete the installation by reinstalling the cable using a more permanent solution. It’s clear that our technician did not do this, and we regret the unsightly error.”

Shaw said it reached out to the Karpiaks for the “poor performance” and that a technician would be reworking the installation Friday.

The company said while it facilitates installation of internet services leased by resellers, customers or resellers are responsible for installing their own modems and routers.