EDMONTON -- A food exchange box that popped up in the Oliver neighbourhood has become popular and appears to be helping the community during a difficult time.

The food box is modelled after the little free libraries that are dotted throughout Edmonton.

Wade got the idea after coming across a recycling box on a walk, it had been damaged and the door had been ripped off.

“I cleaned it up, went back and talked to the Lovegood family… they said ‘Yeah let’s try it’.”

In the spirit of ‘if you build it they will come’ the family took the leap and found the box was quickly being used. 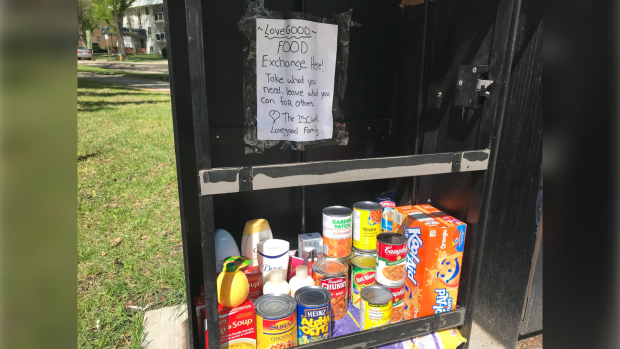 “We need people to fill them up, particularly on the weekends because stuff goes pretty fast,” said Wade. “We encourage non-perishable food in here because we don’t want food that’s open, aside from COVID other things can happen.”

Physical distancing regulations are still in effect but a spokesperson with Alberta Health Services did not discourage the initiative in a statement to CTV Edmonton.

“These boxes do not necessarily present a significant risk of COVID-19, so long as people follow physical distancing precautions, and only touch items they are planning on taking,” said Kerry Williamson with AHS.

“We support communities coming together to help one another, particularly in these challenging times.”

Even with the boxes popularity Wade said people have been considerate of others who might need to use it, taking only what they need.

The Lovegoods have even received requests for eight other boxes around the city.

“One of the other Lovegood members is building and painting boxes and we’ll drop them off where we have requests, we’re actually getting overwhelmed with them right now,” said Wade.