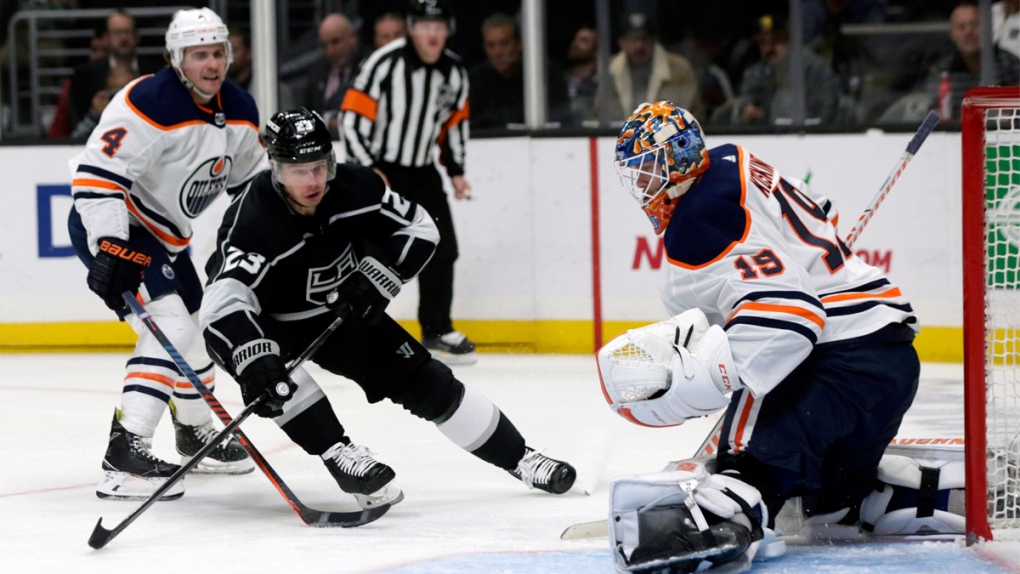 Los Angeles Kings coach Todd McLellan described the offensive prowess of Edmonton Oilers stars Connor McDavid and Leon Draisaitl as “as close to unstoppable right now” as anyone in the NHL.

The Kings found a way to stop them, by forcing McDavid and Draisaitl to play from behind.

Tyler Toffoli had two goals and an assist to lead the Kings to a 5-1 win over the Oilers on Thursday night.

The Kings took a 3-0 lead in the first period, scoring all three against the Oilers' top line of Draisaitl, McDavid and Zack Kassian.

“Our group doesn't necessarily play from ahead all that often, and certainly not by three, so it makes you feel a little bit better,” said McLellan, who coached McDavid and Draisaitl with the Oilers for four years before he was fired 20 games into last season. “But when it comes to 29 and 97, as you mention, I don't think you can take your foot off the gas. Thought we did a really good job of checking them for most of the night, so we're pleased with that.”

Jeff Carter added a goal and two assists for the the Kings, who have won five straight at home. Anze Kopitar and Michael Amadio also scored, Drew Doughty had three assists, and Jonathan Quick made 25 saves.

McDavid scored to extend his point streak to nine games for the Oilers. Mikko Koskinen made 16 saves after replacing Mike Smith, who allowed three goals on 12 shots in the first period.

Toffoli put the Kings ahead 1-0 at 1:32, scoring his fifth from the left circle off a rush created by Jeff Carter's stretch pass after catching the Oilers trying to make a line change.

“We played really bad, especially our line. We weren't ready off the start, so that's on us,” said Draisaitl, who had his point streak end after 13 games.

Kopitar made it 2-0 with 5:39 left on a slap shot from the left circle teed up by Dustin Brown. Kopitar has 12 points, including four goals, in his past 10 games.

Carter closed out the strong start by scoring with four seconds left in the period for the 3-0 lead. Toffoli forced a turnover in the neutral zone to spring the rush, with Carter scoring five-hole with the rebound of Carl Grundstrom's shot.

“The goal right at the end of the first period is a poor goal to give up,” Oilers coach Dave Tippett said. “Five seconds left, we have control of the puck at the offensive blue line, and we give up a goal. That was kind of a microcosm of where we were tonight, not good enough.”

McDavid cut the Kings' lead to 3-1 at 38 seconds of the second. McDavid stole the puck from Ben Hutton and beat Quick glove-side from the slot for his 10th goal and 21st point during his streak.

It was one of the few instances where McDavid was able to find open ice as he was tightly defended by Kopitar throughout the game.

“He still scored one goal, but I've seen him get way more chances and way more breakaways in a game than he did tonight,” Doughty said.

Toffoli scored on the power-play with 2:59 remaining in the third to get his first multi-goal game of the season, adding an exclamation point to the Kings' drubbing of the Pacific Division leaders.

“We know we can be more competitive than we've shown,” Doughty said. “I think you can see how much we've grown over the first 20 games. I'm just looking forward to hopefully moving up in the standings and giving a push for playoffs. A lot of people don't think that's possible, but all of us in here think there's a chance at it.”

NOTES: Oilers D Adam Larsson returned after missing 22 games because of a broken leg he sustained in the season opener against Vancouver on Oct. 2. Larsson played in his 500th career game. ... Edmonton D Matt Benning is in concussion protocol, Tippett said. Benning was hit in the head by an errant stick in the first period at San Jose on Tuesday.