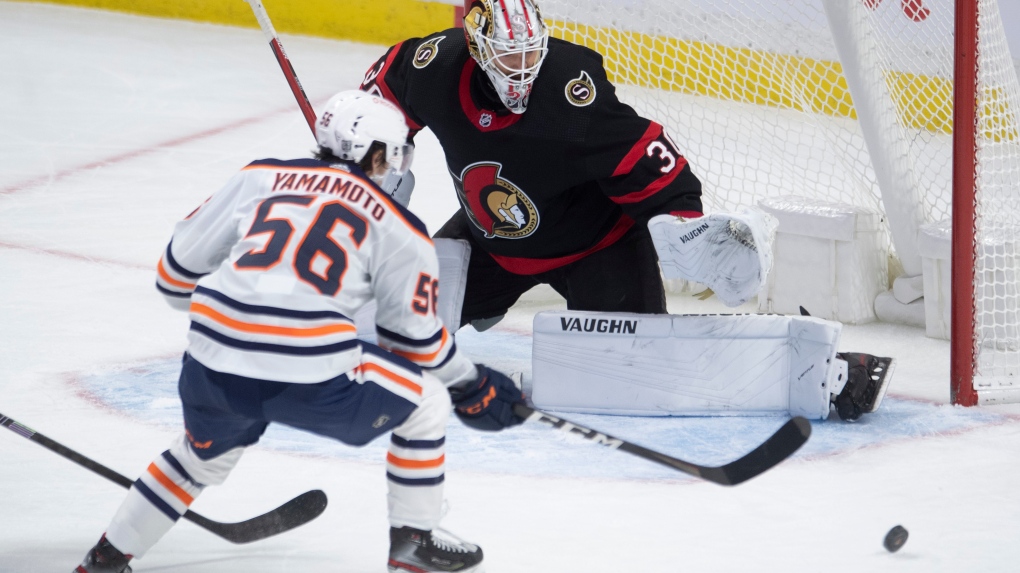 OTTAWA -- Former Senator Tyler Ennis scored the go-ahead goal early in the third period and goaltender Mike Smith won in his season debut as the Edmonton Oilers earned a hard-fought 3-1 victory over Ottawa on Monday.

Ennis, after a nifty toe-drag to wait out a sliding defenceman, beat Matt Murray with a low shot on a 2-on-1 for his first of the season after Ottawa was caught on a line change at 6:09.

Josh Archibald scored into the empty net with 1:10 remaining after Connor McDavid won the puck in his own end. The assist extended McDavid's points streak to 10 games.

The teams meet again Tuesday at the Canadian Tire Centre.

The Senators came into the game last in the league, three points behind Detroit, while posting a league-worst minus-24 in goal differential. But they came out fighting in an entertaining first period, with two bouts in the first two minutes.

Draisaitl also ran his points streak to 10 straight, his fifth career double-digit run. Since he entered the league in 2014-15, only David Pastrnak (five times) and Nikita Kucherov (five times) have recorded at least five point streaks of 10-plus games.

Murray was sharp in the Ottawa net with the Oilers unable to convert on four power-play opportunities in the first 40 minutes. Ottawa opened the third with some drive, outshooting Edmonton 6-1 early in the period only to see the Oilers pull into the lead via Ennis.

Ottawa had lost 10 of its last 11 - with nine of those losses in regulation time - although the losing streak was actually at one given a split in a series with Montreal that saw the Sens win 3-2 last Thursday and lose 2-1 on Saturday.

Prior to that, Ottawa's only other win came Jan. 15 in the season-opening 5-3 victory over Toronto.

Edmonton had a three-game winning streak snapped in a 6-4 loss Saturday at Calgary, the start of a four-game road trip. The Flames game came in the middle of two-game sets against the Sens, with Edmonton winning 8-5 and 4-2 at home last week.

The familiarity bred some contempt with two fights breaking out in the first two minutes. After Ottawa's Austin Watson and Edmonton's Jujhar Khaira dropped the gloves, there was a more intense tilt between Edmonton's Zack Kassian and Ottawa's Erik Gudbranson.

Kassian, who had been urged by coach Dave Tippett to more engaged, needed some repairs after the bout evidently, missing playing time.

Back to hockey, Murray made a fine pad save on a McDavid backhand after one of the Oilers captain's trademark rushes. Edmonton defenceman Tyson Barrie had a chance late in the period but the puck bounced over his stick with the goal open.

Draisaitl and Kailer Yamamoto had a 2-on-1 with the teams playing four on four late in the period but Yamamoto missed the mark. Time ran out on the period with McDavid bearing towards the Ottawa goal after rounding Derek Stepan.

Ennis hit the goalpost from a right angle early in the second. But Ottawa went ahead at 5:33 after Brady Tkachuk chipped the puck out of the Sens zone, leaving defenceman Adam Larsson to chase Dadonov as he raced towards the net.

Larsson got a stick to it, inadvertently flipping it past Smith, with the goal credited to the Russian. Smith stopped Connor Brown in alone later in the period.

Draisaitl beat Murray through the five-hole at 15:11 to tie it at 1-1 with his eighth of the season after the Sens failed to clear their zone and turned the puck over.

The Oilers hit the post three times in the second period, outshooting the Senators 17-9.

The 38-year-old Smith, who had been on long-term injury reserve since Jan. 15, saw his first action since March 11, 2020. Mikko Koskinen had started 12 of the Oilers' 13 previous games with Stuart Skinner starting the other.

It was career regular-season game No. 611 for Smith.

“We're starting to limit some chances. We realize the game we have to play,” he said. “We're moving pucks better. We're breaking out as a group of five better. Just the energy and the confidence level on the bench It's all been better.”

This report by The Canadian Press was first published Feb. 8, 2021