More than $7.7 million raised for Movember in Alberta alone 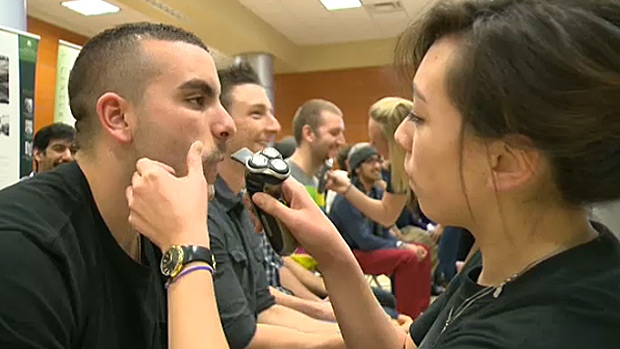 A group of about 100 Medicine and Dentistry students at the U of A had their moustaches shaved Friday, as Movember came to a close.

Come Saturday, there will be fewer moustaches visible in Edmonton – and around the world – as the Movember campaign comes to a close.

Local organizers are calling the month-long fundraiser a success.

This year, more than 36,000 Albertans took part in the movement that encourages people to grow their “mo’s” while raising money and awareness for prostate cancer and men’s health.

Alberta alone raised more than $7.7 million for the cause.

“It’s been incredible. It’s been phenomenal,” said Mike Miller, one of the founders of Movember in Canada and a Movember Edmonton organizer.

“It’s part of that grass-roots movement. More than $7 million was raised in Alberta and had 36,000 Albertans join the cause.”

In the past year, 2,500 new cases of prostate cancer have been diagnosed in Alberta, with 370 deaths.

It’s a cause that’s close to the hearts of many Albertans – including a group of about 100 Medicine and Dentistry students at the University of Alberta, who had their moustaches officially shaved off on Friday, after a successful month of fundraising.

“We’re currently the top team for campus teams in Canada. That includes high school and universities. Today we crossed the $20,000 barrier” said Vikram Karnik, with the group.

“It’s all for a good cause, prostates cancer and men’s mental health. It’s a fun way to fundraise so that kind of competitive spirit between us kind of built into something a lot bigger than what we anticipated.”

Another local group managed to raise more than $20,000 as well.

The office group has been taking part in Movember for six years.

“We’ve had a lot of fundraisers and it’s been a fun month,” said Kevin Peters.

This year’s office group featured 30 men and even women - who helped raise money and awareness.

“The Mo Sistas put on some fake ‘staches. They raised some funds and did a few fundraisers. They were out in the public with their fake ‘staches,” Peters said.

More than 6,300 Albertans participated in Movember this year compared to last.

He said the popularity of Movember continues to grow and that’s also encouraging important discussions on men’s health.

“We’re getting emails from people who get checked or see a doctor for the first time in 10 years. It keeps growing and we keep talking about it,” Miller said.

Edmonton was the first Canadian city to officially take part in Movember.

With files from Veronica Jubinville