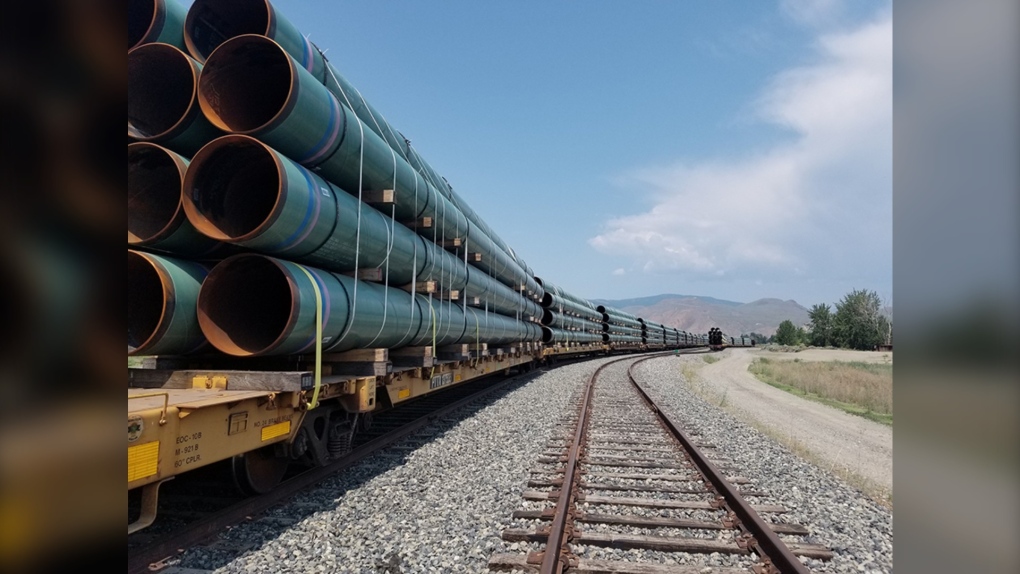 A new non-profit organization is working to get economic benefits for Indigenous communities located along the Trans Mountain pipeline and extension (TMX).

“If you look at the pipeline that's being worked on right now, 60 years ago that pipeline went through our community. There is no benefit that came to the nation directly,” said Alexis Nakota Sioux Nation Chief Tony Alexis.

“As we look at this one, the most responsible thing that we could do right now is to be part of this, to be at that table to make sure that environmental and governance and even economic benefits are going to the communities.”

Fourteen have signed on to Nesika to date, he says, with more joining each day. Communities can sign non-binding letters of intent to attend meetings and learn about the issues, or a formal memorandum of understanding to allow them to sit on the board.

This is not the first time Alexis has led an Indigenous organization with the intent of acquiring ownership in the TMX.

The Iron Coalition was launched in 2019 by the Alberta Assembly of Treaty Chiefs, with Alexis as part of the leadership group. The coalition comprised First Nations and Metis communities in Alberta.

In 2018, the federal government purchased the TMX project from Kinder Morgan for $4.5 billion after years of approval delays. Work is underway to twin the existing 1,147-kilometre Trans Mountain pipeline between Edmonton and a terminal near Burnaby on the west coast of British Columbia. It is estimated to cost more than $12 billion.

In March 2019, then minister of Finance Bill Morneau said the government intended for the pipeline to be moved back into the hands of the private sector.

The Iron Coalition is no longer operational, said Alexis. With no movement from the government, the organization folded.

Now, the new non-profit Nesika is “more fine-tuned” and is open to Indigenous membership from both Alberta and BC.

The principles remain the same, though, says Alexis. “We're doing what we can to ensure that communities receive the benefits.”

Alexis says preliminary discussions have begun with the federal government focused on engagement. Canada still has not made known the terms of the transaction, he says, although he expects negotiations to begin in the next month or two.

TMX is expected to be completed by the end of 2022.

“We're not expecting ownership for free. However, we do expect Canada to be part of the financing solution,” he said.

“Once we know what Canada's going to do, then we'll align ourselves with the partners that are needed to make sure there's a transaction done properly.”

Whether one of those partners will be Alberta Indigenous Opportunities Corporation (AIOC) in providing a loan guarantee or capacity grant funding “is a bit early to tell right now, but certainly if there's opportunities for that we'll not leave any stone unturned,” said Alexis.

The AIOC was created by the Alberta government in November 2019 to facilitate loan guarantees to Indigenous groups wanting to invest in natural resource projects and related infrastructure. The range for a loan guarantee is $20 million to $250 million.

Alexis said the federal government has expressed interest in working with groups like Nesika, instead of communicating with individual communities.

When the Iron Coalition was created in 2019, other First Nations formed groups to look at purchasing the pipeline. Project Reconciliation, which had opened its membership to Indigenous communities in Alberta, BC and Saskatchewan, was looking to own 51 per cent of the line. The Western Indigenous Pipeline Group had membership of First Nations along the pipeline and were also seeking 51 per cent ownership. The Indian Resource Council, the majority of their membership in western Canada, wanted to see the TMX fully Indigenous-owned.

Alexis says he's doesn't know the status of these groups or their continued interest in purchasing the pipeline, in part or wholly.

He says Nesika will look at equity and non-equity options and revenue sharing for its members and there will be no upfront capital requirements from participating communities.

“Both options have no financial risks to the community. We are working in that way. We want to make sure that communities have benefits,” he said.

Nesika is not backed by industry or affiliated with financial institutions or operating parties, says a news release. The organization serves from a “consensus-based model that values equally the voices of all communities.”

Joining Alexis as founding directors of Nesika are Chief Alice McKay of Matsqui First Nation Councillor David Walkem of Cook's Ferry Indian Band, and Mark Peters from Peters First Nation all from BC.

Meanwhile, Alexis Nakota Sioux Nation along with Alexander First Nation, Enoch Cree Nation, and Paul First Nation have formed the First Nation Capital Investment Partnership (FNCIP) to invest and acquire assets specifically in their region and to work on projects over $50 million.

“We (FNCIP) haven't spoken specifically on TMX, but certainly if those conversations come up, we will look at it,” said Alexis.

He doesn't see FNCIP and Nesika as working in competition.

“I think the intent of these two organizations is very clear and they're different scopes. The Trans Mountain pipeline involves 129 communities (and) FNCIP investment involves four communities. Each are strategically designed to focus on specific projects,” he said.

Paul Poscente is executive director of Nesika and also serves as CEO for Axxcelus Capital Advisory Partners, which will be the exclusive financial advisor for FNCIP.

How sellers can maximize the value of their homes

Hundreds more fighters have emerged from the Mariupol stronghold where they made their last stand and surrendered, Russia said Thursday, and the Red Cross worked to register them as prisoners of war, as the end of a key battle in the conflict drew closer.