Oilers and Panthers meet after being on opposite ends of comebacks

Oilers and Panthers meet after being on opposite ends of comebacks 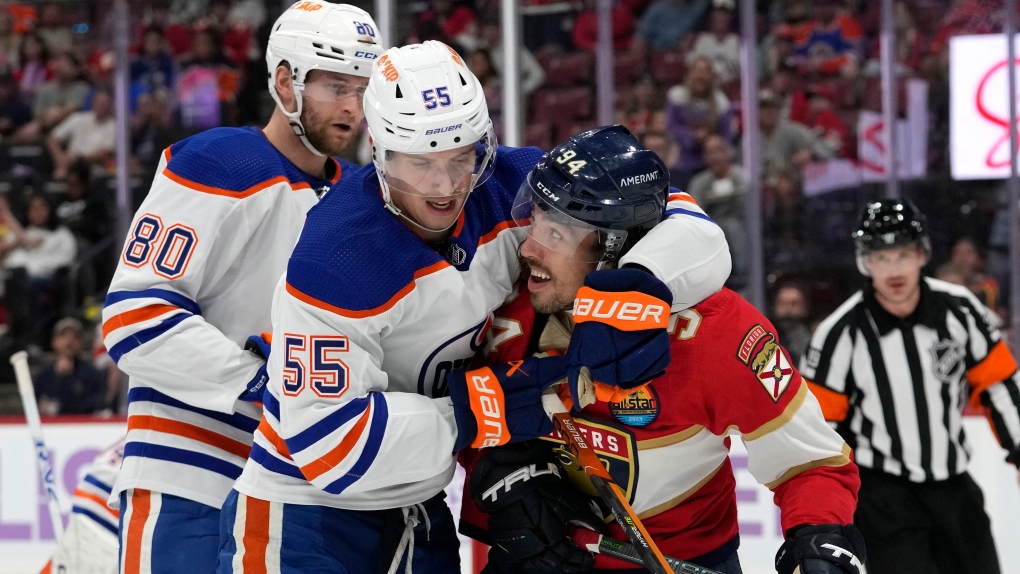 The Florida Panthers and Edmonton Oilers -- who had differing roles in massive comebacks Saturday on the East Coast -- will now head west to face each other on Monday night.

Edmonton trailed the New York Rangers 3-0 in the third period before prevailing 4-3 in regulation on Saturday. Meanwhile, later that night, Florida led 3-0 in the first period and 4-1 in the third before losing 5-4 in overtime to the visiting St. Louis Blues.

That concluded Florida's brief two-game pit stop at home, but now the Panthers will start a five-game road trip that begins with Monday's game at Edmonton.

"We made mistakes that are not usual for us," Panthers defenseman Radko Gudas said. "We have to remember the mistakes and forget about the loss."

Gudas is coming off a monster game against the Blues. He scored one goal and had game highs in hits (five) and blocks (four).

Although he has two goals and four assists this season, Gudas is more known as the enforcer on a team that includes offensive-minded defensemen such as Brandon Montour (19 points) and Gustav Forsling (15 points).

Aaron Ekblad has just eight points, but he missed 11 games earlier this season due to injury.

The other key member of the defense is 35-year-old Marc Staal, who is in his 16th NHL season and has 49 career goals and 166 assists.

On offense, the Panthers' leading goal-scorer is Carter Verhaeghe, who has 12. Matthew Tkachuk leads the Panthers in assists (18) and points (27).

Panthers captain Aleksander Barkov (18 points), who scored a career-high 39 goals last season, missed the Blues game due to a non-COVID illness. He didn't travel with the team to Alberta for Monday's game in Edmonton and Tuesday's game in Calgary.

In goal, 34-year-old Sergei Bobrovsky began this season as the starter. But he has slumped with a 4-5-1 record and a 3.62 goals-against average.

Former backup goalie Spencer Knight, 21, has started six of Florida's past nine games. Knight, who was Florida's first-round pick in 2019, has played just 47 NHL games, including 40 starts. But he has better numbers than Bobrovsky this season, including a 6-3-2 record and a 2.63 GAA.

As for the Oilers, they are not totally thrilled with how they played against the Rangers.

"It was a big character win," said Edmonton's Leon Draisaitl, who scored what became the game-winning goal with 2:02 left. "But we can't be going down 3-0 every game. ... It's too exhausting on players."

The Oilers made it to the Western Conference finals last season, their best finish since 2005-06.

After the season, the Oilers signed goalie Jack Campbell away from Toronto. Campbell, 30, got a five-year, $25 million contract. The former first-round pick is 7-5-0 with a 4.04 GAA.