The Ukrainian national anthem soared across the snow-filled air northeast of Edmonton Friday, when the community of Lamont gathered to pray and raise a blue and yellow flag.

Both the town and county have Ukrainian roots dating back more than 130 years when the first settlers arrived. In 2018 locals adopted the name "The Cradle of Ukrainian Settlement."

Ukraine's State Emergency Service has said that more than 2,000 civilians have died so far during the Russian invasion, and an estimated 700,000 have fled the country.

"It's difficult watching it every day," said former Alberta Premier Ed Stelmach, who lives in the area. "The bombing continues. Please do whatever you can to support. Right now, it's cash donations."

For Terry Eleniak, the connection between Ukraine and Alberta goes back 131 years.

“My great grandfather, my great gito, was the first Ukrainian to ever come to Canada,” Eleniak said, adding that snow and the cold couldn't stop him from attending.

“They didn’t have to twist my arm twice. My roots are here, and my roots will continue,” he said.

Lamont, a town of about 1800 people, closed roads and streamed the ceremony live on its Facebook page. 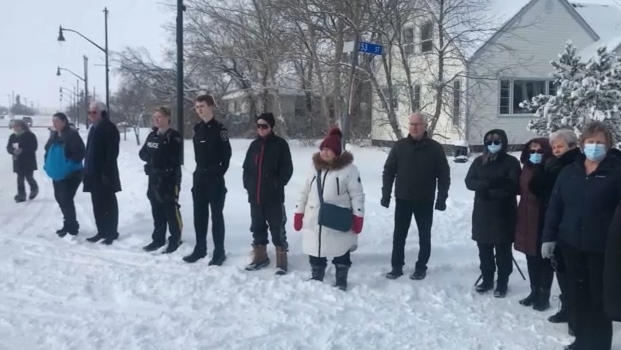 'TRYING TO DO SOMETHING PROACTIVE HERE'

“Ukrainians have always been very strong, and one of the things that Ukrainians do is we look for an excuse to get together,” said Lamont County Reeve David Diduck.

Lamont has a twin village in Ukraine called Nebyliv, where many of the original town's settlers came from.

“We do understand that they’ve been subjected to military attacks,” Diduck said, adding it's been tough to get confirmed information.

Hazel Anaka was there to collect donations for the Canada Ukraine Foundation.

“The impulse is to stay at home glued to the TV, watching the horror. But I think it helps if we do something tangible,” she said.

“It’s important that the rest of the world knows that we haven’t forgotten, and we’re trying to do something proactive here.”