Red Deer residents join climate strike, but not all students granted time off 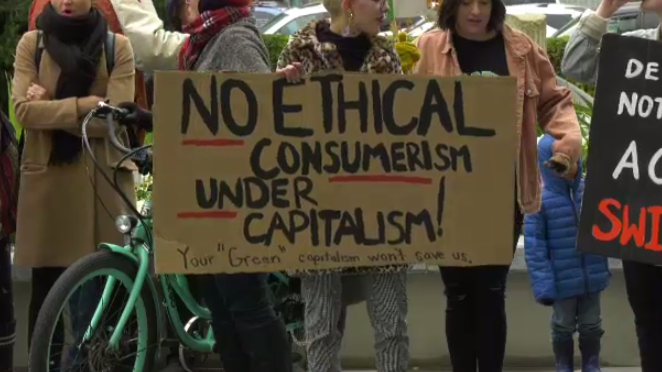 Around 40 Red Deerians took to City Hall Friday afternoon as part of climate strikes taking place around the world.

The demonstration was organized by the Council of Canadians.

“Climate change is happening but now its accelerated. Scientific evidence shows glaciers are melting twice as fast as they thought, the seas are getting more acidic and there’s more environmental pollution. So it was really important we brought this to everyone’s attention,” said Council of Canadians chairperson Chris D’lima.

“It’s really up to each one of us. We can blame the legislators and point fingers at those who aren’t doing enough but it’s really up to us. Are we saving our plastic, are we saying to our stores ‘don’t use plastic bags.’”

The protests were inspired by 16-year-old Greta Thunberg's calls for students to strike.

“I think she is an amazing climate activist and she’s the one who’s going to inherit the world with all the younger folks so we need to listen to her,” said D’lima.

However, organizers were upset to learn that students from Red Deer Public and Catholic Schools would not be given the time off to participate.

“It’s a really sad thing but we do know across Canada there’s been hundreds and hundreds of schools who have let their kids out two hours early so they could demonstrate. It’s maybe a local phenomenon because the whole movement has been led by the children really, they are the ones that are driving this,” D’lima said.

Around 200 strikes happened across Canada.

A look at the #ClimateStrike in Red Deer. Around 40 people made their way to City Hall to show their support. #climatestrikecanada #RedDeer pic.twitter.com/XbT8495QxD