EDMONTON -- A chef at a 49-seat Edmonton restaurant has changed the name of a tongue-in-cheek burger after he was told to cease and desist by the corporate juggernaut that is McDonald's.

The trouble began when chef Paul Shufelt of Woodshed Burgers decided to pay homage to the fast food giant on his menu.

That netted the local business a cease-and-desist letter from McDonald's Corporation, which said it has trademarked the phrase Filet-O-Fish.

"McDonald's is concerned that your restaurant's use of EFFING FILET O' FISH, particularly in association with a sandwich or burger menu item, is likely to cause confusion amongst consumers and is also likely to diminish and dilute the strength of McDonald's trademark."

So apparently someone's lawyers didn't like the name of our *Effing Seafoods Fillet o Fish* burger... We have promptly ceased the use of the name as requested and registered the trade name and renamed our burger the *Mc Effing Fish Fillet* #lawyers #lawyer #mc #flattery #law #mick #effingrob #tm #trademark #yegburger #yeglawyer #withoutprejudice #ceaseanddesist

"Not overly surprised that they were upset about that," Shufelt said Thursday, adding that many of his menu items like "The Crispy Colonel" pay tribute to other companies. "I'd be lying to say that McDonald's wasn't one of those restaurants, it's sort of a foundational burger joint."

Shufelt heeded the cease and desist order, but instead of changing the burger name to something less controversial, he doubled down.

Woodshed diners are now able to order the "McEffing Fish Filet," which Shufelt cheekily said he has registered as a trademark.

"Realistically I'm a 49-seat restaurant in Edmonton, Alberta. They have, I think it's 36,000 restaurants worldwide," he said. "I'm quite certain we're not going to damage their integrity or ruin the reputation of their fish burger, and if we did, man, that'd be pretty impressive I guess." 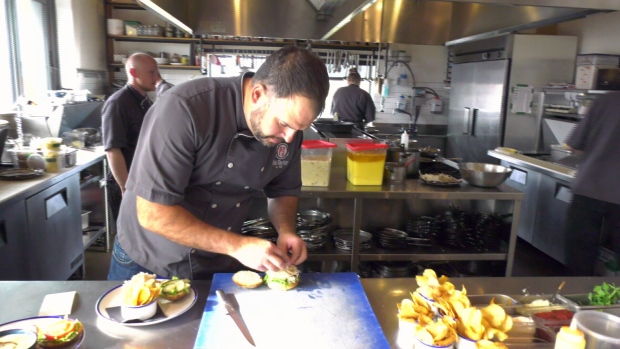 "Canadian trademark law requires a trademark owner to take steps to prevent the unauthorized use of its trademarks, regardless of who is using them, or risk losing the rights to those trademarks," the company said.

Shufelt said he hasn't heard back from the company since he changed the burger's name, but he expects McDonald's still isn't loving it.

"Hopefully this is the end of the conversation," he said. "I don't think they've trademarked every word out there, but it is what it is."