EDMONTON -- After a season that saw him lead the country in rushing, garner Heisman Trophy attention and emerge as a National Football League prospect, you could forgive Sherwood Park's Chuba Hubbard for taking a day off.

Instead, the Oklahoma State running back will play what could his final game for the Cowboys on Friday afternoon in the Texas Bowl.

"There's a million things that factor into that decision. Obviously, I've worked my whole life for this next step. Now that it's here ... I don't want to rush it. that's why I'm taking my time," Hubbard, 20, told reporters ahead of today's game.

"I'm just taking it day by day and trying to focus on this game and then after that I'll figure it all out."

Hubbard was named first-team All-America and Big 12 Conference Offensive Player of the Year after leading the nation with 1,936 yards rushing.

The redshirt sophomore has said he’ll announce whether he’ll enter the NFL draft or return for another season of college football sometime after the bowl game.

"Just to finish the season with my teammates," he told the team's website about playing in the Dec. 27 Texas Bowl against Texas A&M.

"I feel like I wouldn't be that team guy if I held back."

Hubbard has two years of college eligibility remaining should he decide to return to the Cowboys for the 2020 season. NFL draft experts expect him to be selected between the third and fifth rounds should he elect to go pro.

“I felt like he would play all along,” Oklahoma State coach Mike Gundy said. “In the environment around college football today, we’re never sure, but he’s a class guy. He likes his team. He likes Stillwater. He likes Oklahoma State. He has a great relationship with the coaching staff. I know he’s excited about playing in the game, and we’re glad to have him be a part of our team.”

The fact that he's suiting up for a game with little at stake had led some to speculate that he would return for another year of college football. 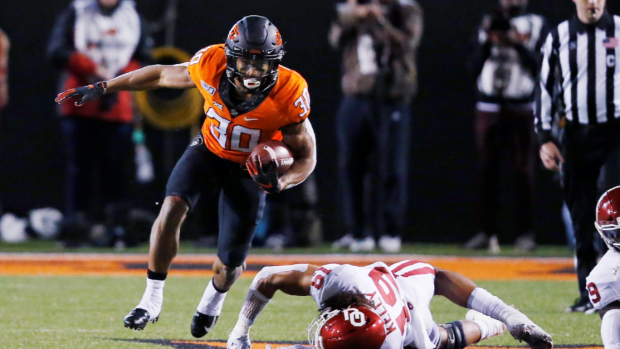 He'll take on a Texas A&M defence in Friday's matchup that rank 30th in the nation in rushing defence. But, the Aggies will be without their star defensive lineman and likely NFL draft pick Justin Madubike who will be sitting out rather than risk injury and jeopardize his pro football prospects.

“They’re very dynamic on offense, the tailback Hubbard is phenomenal and they can throw it,” Texas A&M coach Jimbo Fisher said. “We’ll have our hands full.”

The Texas Bowl gets underway today at 4:45 p.m. MT from Houston.

Hubbard has ran for at least 100 yards in 10 straight games and is tied for third in the country with 21 rushing touchdowns. His 1,936 yards rushing rank second in school history behind the 2,628 yards rushing Barry Sanders piled up in 1988 when he won the Heisman Trophy, awarded to the sport's most outstanding player.

He finished eighth in Heisman voting this year, far behind winner Joe Burrow but ahead of other college stars Travis Etienne of Clemson and Alabama quarterback Tua Tagovailoa.

He was only the fourth ever Canadian, and first since 1995, to receive votes for the prestigious award and his 68 points were the most ever for a Canada-born player.

The NFL's College Advisory Committee provides information to prospective draft picks, including when in the draft they are likely to be selected.

Hubbard has told reporters he requested and received a draft grade from the committee and that it will factor into his decision.