The associate minister for the Status of Women is apologizing after the results of an essay contest.

Alberta launched the “Her Vision Inspires” essay contest earlier this year to encourage young women to share their vision for the province, and what they would do if elected to government.

The essay that was awarded third prize has sparked criticism from the opposition NDP and members of the public alike.

Part of the essay reads:

“While it is sadly popular nowadays to think that the world would be better off without humans, or that Albertan children are unnecessary as we can import foreigners to replace ourselves, this is a sickly mentality that amounts to a drive for cultural suicide. The first rule of health for any biological population is their ability to reproduce and pass along their way of life into the future."

“Women are not exactly equal to men. This biological reality is also under attack by present-day delusion. To try to promote that women break into careers that men traditionally dominate is not only misguided, but it is harmful. Such a focus detracts from the languishing unique strength and the truly important role that women have in the preservation of our community, culture, and species.” 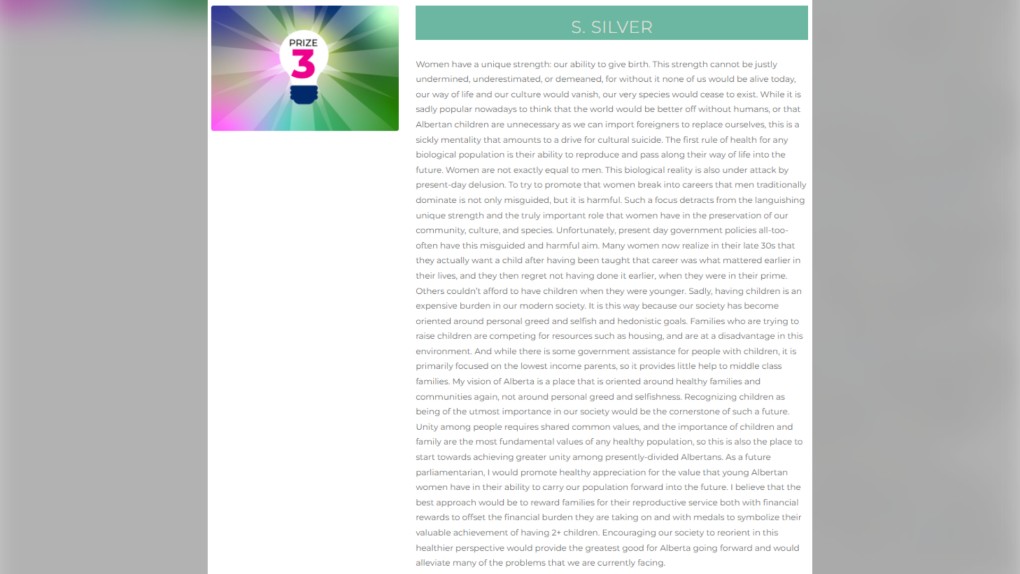 The winners of the contest were chosen by Associate Minister for the Status of Women Jackie Armstrong-Homeniuk and a panel of female members of the legislative assembly.

The winning essays were briefly posted online, but that webpage has since been taken down.

Armstrong-Homeniuk released a written statement about the controversial essay on Tuesday.

Giving women of all ages a voice is something that I will always stand up for. To young women who aspire to one day have a career in politics, please keep using your voice and advocating for your communities.”

Later in the day, the minister released a second statement:

“Over the last several hours, some of my caucus and cabinet colleagues have raised concerns with me about how such an essay could be selected for an award.

As the Minister for the Status of Women, I want to emphasize that I do not support rhetoric that in any way diminishes the importance of the contributions of over half of Alberta’s population.

It is clear that the process failed, and I apologize for my role in that. The selection of this particular essay and awarding it with third prize was a failure on my part as the head of the judging panel.

Alberta values the contributions of women and newcomers, and we will continue to work towards removing barriers to equality so that all Albertans can enjoy opportunities and success in our province.”

“There are a number of checks and balances that go in place before something is promoted like this, put up on a website that’s celebrated, and nobody within the UCP stopped and said ‘This is inappropriate.’”

The opposition party isn’t alone in their concerns. Lise Gotell is a gender studies professor at the University of Alberta.

She says the views espoused in the essay align with those historically held by fascist governments.

“To see a government even implicitly endorsing the views like those contained in essay three is troubling.”

The ministry refused to confirm who was on the judging panel, or the criteria used.

“Some explanation of what process led to this failure to recognize highly problematic essay,” she said. “I think some answer to those kinds of questions would certainly be welcomed. Because what this currently does is it leaves the impression that that more extreme wing of social conservatism is being embraced and welcomed by the government.”

A spokesperson for Nathan Cooper, the speaker of the Alberta Legislative Assembly issued the following statement on Tuesday:

“Neither the Speaker’s Office nor the Legislative Assembly Office were involved with the selection of the essays in any capacity, including who was on the MLA panel judging the contest.”

“As soon as the content of the 3rd place winner was brought to the Speaker’s attention he immediately made the decision for the content to be removed. The content is abhorrent and does not reflect the views of the Speaker or the Legislative Assembly Office.”

Hurricane Ian carved a path of destruction across Florida, trapping people in flooded homes, cutting off the only bridge to a barrier island, destroying a historic waterfront pier and knocking out power to 2.5 million people as it dumped rain over a huge area on Thursday.

'Patience is wearing thin,' for Maritimers who question if utilities ready for storms

Some Maritimers who lost power for days after post-tropical storm Fiona are questioning whether power utilities have properly prepared their grids for the powerful storms that are increasingly battering the region.

A family doctor in Calgary has filed a human rights complaint over Ottawa's decision to no longer require masks on airplanes to prevent the spread of COVID-19.

The family of Hae Min Lee is appealing a Maryland judge's decision to vacate the murder conviction of Adnan Syed, who was accused of killing the teen and served more than 20 years in prison before his release last week, according to a court document filed Wednesday.

You may not be anywhere close to ready for the holidays — but retail chains certainly are. Christmas trees are already on sales floors at retailers such as Costco and Lowe's.

NATO said Thursday it would retaliate for any attacks on the critical infrastructure of the 30-member-countries organization as it suggested that damage to two gas pipelines off Denmark and would-be member Sweden in international waters in the Baltic Sea is the result of sabotage.

Kremlin gets ready to annex 4 regions of Ukraine on Friday

Russia on Friday will formally annex parts of Ukraine where separation 'referendums' received approval, the Kremlin's spokesman said, confirming the expectations of Ukrainian and Western officials who have denounced the Moscow-managed votes as illegal, forced and rigged.