U of A students organize walkout in support of Wet'suwet'en

EDMONTON -- A group of University of Alberta students walked out of class and rallied at their school Monday to support the British Columbia first nation opposing a major pipeline project.

The RCMP have arrested more than a dozen members of the Wet'suwet'en Nation, whose hereditary chiefs are against the Coastal GasLink pipeline.

Coastal GasLink signed agreements with a number of First Nations, but the Wet'suwet'en hereditary chiefs maintain the project cannot continue without their approval.

A B.C. Supreme Court injunction prevents the first nation members to block access to the work site, but Wet'suwet'en responded with an eviction notice for Coastal GasLink.

The 670-kilometre pipeline is part of the LNG Canada $40-billion liquefied natural gas export terminal project and is designed to stretch from northeast B.C. to the terminal on the coast.

There have been a number of protests in support for Wet'suwet'en Nation across Canada within the past week.

"Rallying youth, rallying the future minds of this country, making sure they know what's happening," said Austin Mihkwaw, who participated in the protest.

After their own rally, the students went to Enbridge Place downtown and joined another rally held by Indigenous Youth for Wet'suwet'en.

With files from CTV News Vancouver 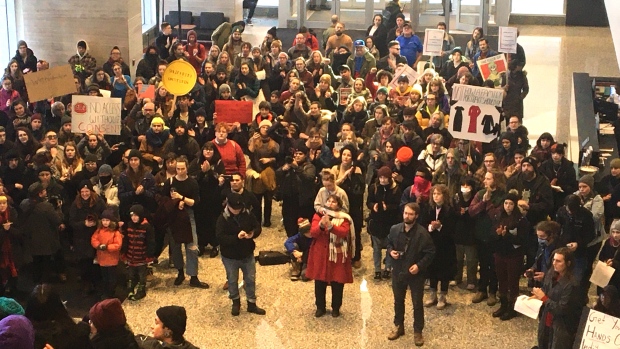