Delivering a healing message near the waters of Lac Ste. Anne Tuesday evening, Pope Francis focused on the resilience of Indigenous Peoples in spite of the "terrible effects" of colonization.

The head of the Roman Catholic Church visited the largest annual pilgrimage site for Indigenous Peoples and Catholics in western Canada, emphasizing the long road ahead for healing and reconciliation. He prayed in front of Lac Ste. Anne and then sprinkled the crowd with holy water as a blessing.

"How many hearts have come here with anxious longing, weighed down by life's burdens and found by these waters consolation and strength to carry on," said Pope Francis, in Spanish.

Francis encouraged the pilgrims to return to the "sources of life," including God, our parents and grandparents.

"Waters give life," he added. "I think of the dear grandmothers here with us. Dear grandmothers, your hearts are springs from which the healing power of faith flowed, and with it, you quench the thirst of your children and grandchildren.

"I am struck by the vital role of women in Indigenous communities. They occupy a prominent place as blessed sources, not only of physical but also of spiritual life."

The first reading, read by Cecilia Babesca from the Tlicho community near Yellowknife, N.W.T, shared how the prophet Ezechiel had a vision showing the healing power of water.

Oral history from the Stoney Nakoda people shares how their ancestors migrated from a remote area — in what is now known in the U.S. as the Dakotas to Alberta — because their chief had a vision of a lake, now called Lac Ste. Anne.

The Alexis Nakota Sioux Nation first called the lake Wakamne, or God's Lake. The Cree named the site Manito Sahkahigan, or Spirit Lake. For generations, the lake was a traditional gathering place for ceremony and trade.

Rev. Jean-Baptiste Thibault, the first Catholic priest to create a mission in the area, called the lake Lac Ste. Anne.

The first recorded pilgrimage to the site was organized in 1889. It continues to this day, always during the week of July 26, the feast day of St. Anne.

The Pope recognized the "wounds suffered" by Indigenous Peoples through colonization and residential schools.

"Part of the painful legacy we are now confronting stems from the fact that Indigenous grandmothers were prevented from passing on the faith in their own language and culture," said the Pope.

"That loss was certainly tragic. But your presence here today is a testimony of resilience and a fresh start of pilgrimage towards healing of a heart open to God who heals the lives of communities. Today, all of us as Church need healing." 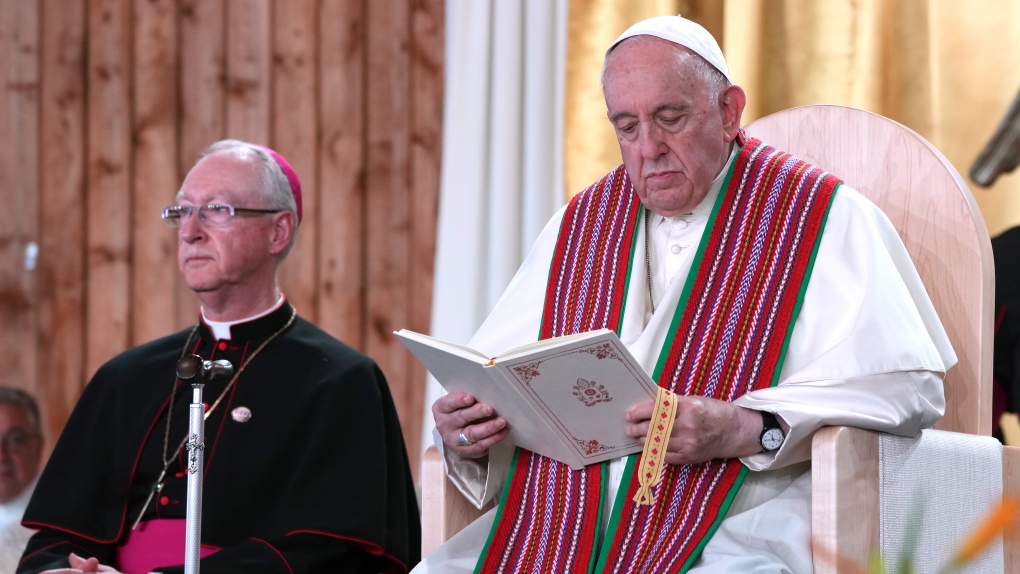 Pope Francis prayed that the Church and Indigenous Peoples "move forward in the healing process towards an evermore healthy and renewed future."

He travelled to the pilgrimage site after celebrating an open-air mass at Commonwealth Stadium in Edmonton as part of his six-day national tour he described as a "penitential" visit to advance the Church's journey of reconciliation with Indigenous People.

A handcrafted statute, commissioned by Pope Francis and crafted by Timothy Schmaltz, was unveiled at the lake site, in what organizers say is a gift from him to the people.

The sculpture depicts Our Lady Undoer of Knots, a title Catholics use to refer to the Virgin Mary.

Poitras said it was an honour to welcome the Pope to the pilgrimage site, which holds sacred significance to First Nations, Métis, and Catholic pilgrims alike.

"Lac Ste. Anne is a place of healing," Poitras said in a statement before the ceremony. "While we were happy to welcome His Holiness to this sacred land, we hope that this visit marks a milestone on our journey of healing.

"Words and apologies are not enough," she added. "(We hope) this will lead to real actions and accountability, so that we as a people may focus on healing."