What will be the legacy of Pope Francis' visit to Alberta? Catholic leaders weigh in

What will be the legacy of Pope Francis' visit to Alberta? Catholic leaders weigh in

For Catholic leaders in Edmonton, being able to host the Pope means an opportunity of a lifetime, with the hope his visit will reinvigorate the local faith community and reconciliation efforts.

Approximately one of every four Albertans self-identify as Roman Catholic, with approximately 375,000 practicing Catholics in the Archdiocese of Edmonton.

Ryan Topping, vice president of Newman Theological College, says that the number has remained stable over the last 40 years in Alberta, while in Quebec, the number of practicing Catholics has declined significantly.

"We have a lot of Catholics who are still immigrating to Canada, particularly from the Philippines, from African countries like Nigeria," Cuplinskas said.

"Generally, we see across Canada, but also here in Alberta, the people who don't identify with any religion rising," she added. "They make up about 30 per cent of Albertans at this time."

Topping hopes the Papal visit will generate greater interest in the Catholic Church and help lapsed Catholics or those who have stopped attending mass because of the pandemic return.

"When John Paul II came and visited Canada, what happened then was you had a renewal of faith and a renewal of hope among a lot of people," Topping told CTV News Edmonton.

Topping himself says he was part of that "John Paul II generation," who were inspired by his devotion to learn more about the faith.

"When he made his tours in Canada, the United States, and Europe, there was a great swell of interest in Catholicism and, indeed, of the priesthood," he said.

"Today, there are a lot of people who are privately spiritual but not publicly religious, and the papacy is a unique institution in the world in that here you have a direct succession from Jesus Christ, who lived 2,000 years ago up until the present day," he added.

Cuplinskas hopes the massive spotlight and international attention Papal visits bring will help build a greater understanding of colonialism and the traumas of residential schools.

"It's a moment again for all Canadians to pay attention to the issue," she said. "To think about how we are all engaged in this process of truth and reconciliation."

"To divert people's gaze for reconciliation with Indigenous Peoples," she added. 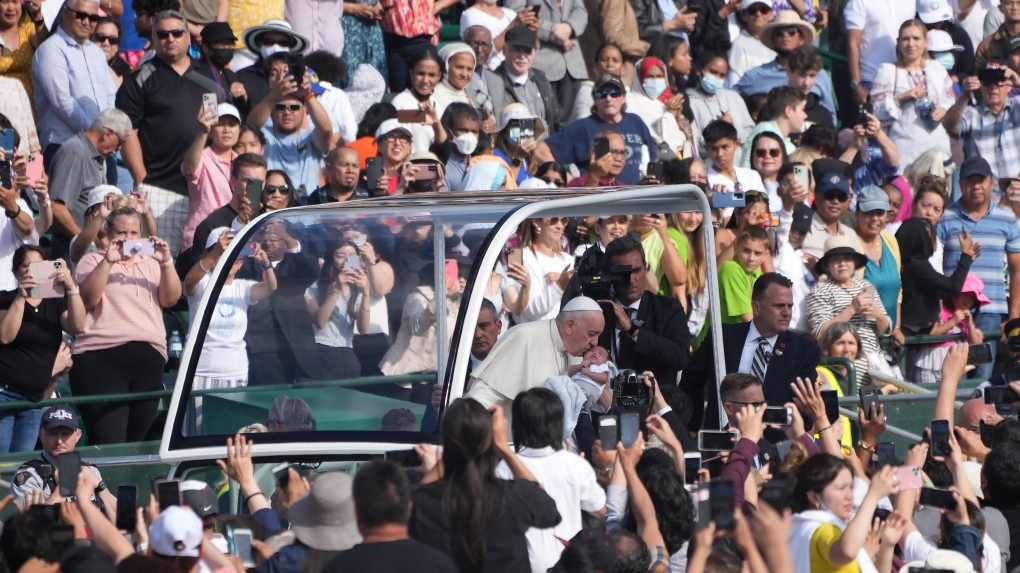 Pope Francis kisses a baby as he arrives at Commonwealth Stadium to take part in a public mass in Edmonton, Tuesday, July 26, 2022, . THE CANADIAN PRESS/Nathan Denette

'A NEW WAVE OF HEALING'

Fr. Susai Jesu, pastor at Edmonton's Sacred Heart Church of the First Peoples, hopes that the main message of the visit, reconciliation with Indigenous Peoples, is not lost.

"I really hope his coming will really bring more healing to those who are really struggling, struggling with the trauma and recovery of their own experiences."

Jesu, originally from India, came to Canada to serve as a pastor in Indigenous communities and now speaks Cree. He hopes the greater Church and Canadians recognize that a Papal apology is just one step on a path toward reconciliation and that everyone has a role to play.

"(The Pope) is paving the way towards reconciliation and healing," Jesu said. "Then we are the ones who have to work towards that in terms of actions."

"We need to work together and bring people together," he added. "So that we walk together as much as possible, as one family." 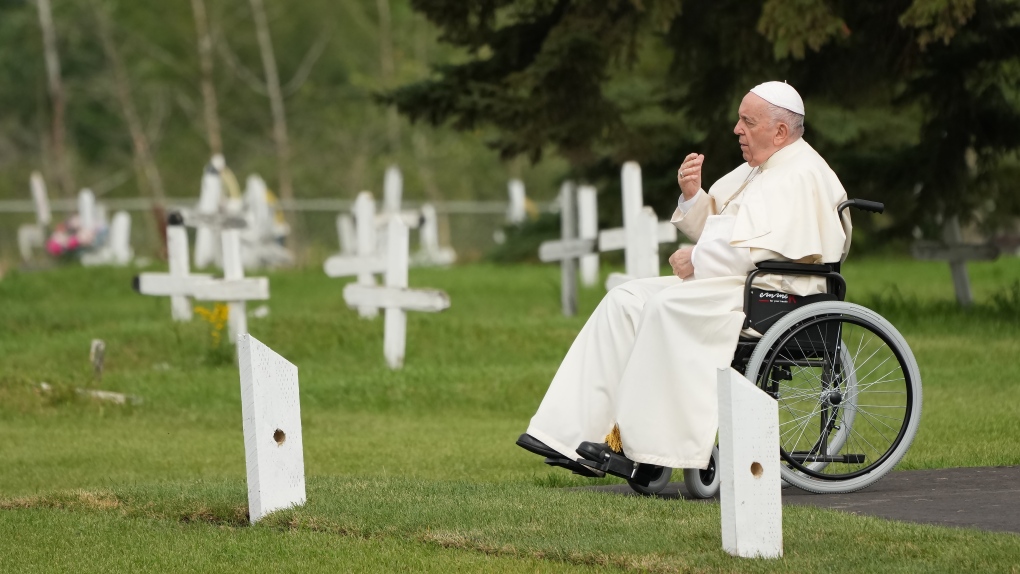 Pope Francis prays at a gravesite at the Ermineskin Cree Nation Cemetery in Maskwacis, Alta., during his papal visit across Canada on Monday, July 25, 2022. THE CANADIAN PRESS/Nathan Denette

"That there will be a new opportunity that many have been walking, carrying a heavy cross, being made a little bit lighter with the help of our Holy Father," Bouvette said.

"I cannot help but think of my kokum," he added, "who 12 years in this city in one of those residential schools could have probably never have imagined those many years later that her grandson would be involved in this work.

"It is a direct legacy to her that I hope to be of service in this mission."