Pope Francis waved at thousands of people and blessed babies on the Popemobile ahead of the open mass at Edmonton's Commonwealth Stadium on Tuesday.

The pontiff was driven around the stadium as he smiled and waved at the crowds, and kissed a few babies before mass began. 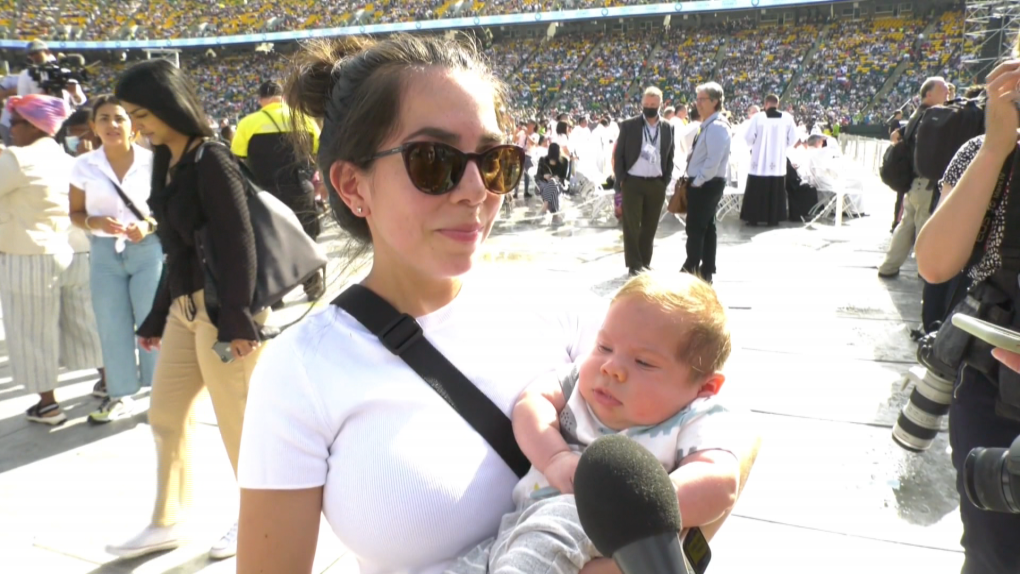 A woman from Calgary whose two-month-old baby was blessed by the Pope told CTV News she was "full of joy and overwhelmed."

As crowds were smaller than expected — approximately 40,000 people according to organizers, instead of the more than 50,000 anticipated — organizers closed Clarke Stadium, a smaller stadium located next to Commonwealth Stadium where the Popemobile was going to drive around and spectators were going to watch the mass on big screens.

Some attendees lined up outside Commonwealth as early as 5:45 a.m., well ahead of gates opening at 7:30 a.m.

The first group in line told CTV News they wanted to see the Pope "right away."

Paul Hison, from San Diego, added that he's really grateful to be in Edmonton for the Pope's visit.

After the mass, an Indigenous woman from Ontario who came all this way to support her mother said the experience was hard.

"I don’t think a mass would change a lot of people's minds about the Pope's visit," Cindy Paypompee said.

A woman who travelled to Edmonton from Red Deer told CTV News she could feel the Pope's spirit.

"I am a proud Catholic and it was awesome to feel his presence when he first came in," Natalie Tuchscherer said.

Later on Tuesday, the pope will visit Lac Ste. Anne to participate in the community's annual pilgrimage.

Watch the mass live on CTVNewsEdmonton.ca.