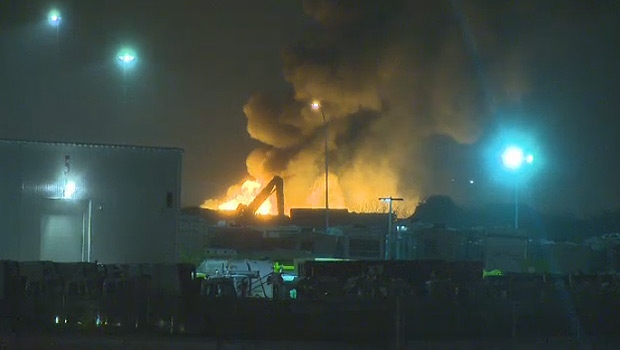 Investigators say that a scrap plastic pile fire, ignited by embers from workers cutting steel nearby, forced one business to evacuate as a precaution.

Monday night Strathcona County firefighters responded to reports of a fire around 6 p.m. at an industrial area on 8660 First Street, upon arrival they found that a scrap pile had caught fire.

There are no fire hydrants in the area so water had to be shuttled in and the fire was brought under control.

A shift in the wind prompted RCMP to evacuate one nearby business, Carillion Canada, as a precaution.

“We got told we weren’t allowed to come into our shop. They had 92 and 90 Avenue shut,” said Brad Miller, who works at the evacuated shop.

“We were luckily to get in early enough [Monday evening], they escorted us in to put the trucks away and everyone in the back waited, as soon as the fire started getting worse.”

Alberta Environment was monitoring the situation but did not issue any air quality advisories on Monday night or Tuesday morning.

Officials said on Tuesday afternoon that the fire was declared out by 2:30 a.m. and other than the damage to the scrap plastic no other property was damaged.

Investigators determined that workers had been cutting steel nearby and embers caught the pile on fire.