'You can save a life with something like this': Red Deer College students create flying Wi-Fi hotspot 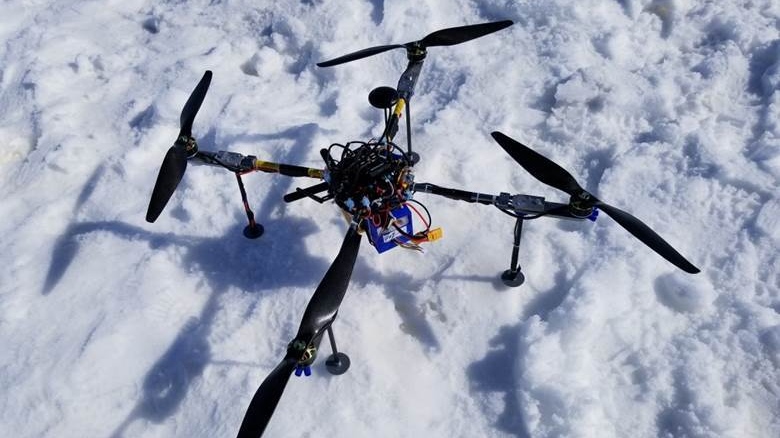 Red Deer -- A group of six students from Red Deer College is being recognized for creating a flying Wi-Fi hotspot.

The team was one of eight finalists for the Association of Science and Engineering Technology Professionals of Alberta (ASET) Capstone Project of the Year.

“The Wi-Fi project was really interesting to us and became a finalist because of its ingenuity. It really also serves the public good,” ASET CEO Barry Cavanaugh.

The students equipped a drone with 18.5 inch propellers and special radio equipment to allow it to fly up to 200 feet high, creating a large radius for cell signals. The design could be particularly helpful for search and rescue teams who may be in remote areas without cell service.

“It could be easily applied to jobs that require you to hike in a place that’s pretty remote, where they have very little cell signal. So this could easily fly over the trees and terrain and give you a way to call,” said team member Jonathan Wong.

“You can save a life with something like this, if the search and rescue team is in the back county and they need to get a message out quickly, pop up the drone, you got contact with a cell tower,” said Cavanaugh. “We like to believe that engineering technology generally is more interested in the benefit to the public then profitability but this could be both.”

The project has many benefits according to the team, including costing up to 40 per cent less than constructing a portable cell tower, it takes less time to set up, there are no road restrictions, and it’s less expensive than a satellite phone would be.

“You could set this up in less than 30 minutes and it flies up to 200 feet and it can easily make some phone calls,” said Wong.

The drone can fly for up to one hour in warm weather and it can recharge itself on its base.

“I think this is  an invention that needs to be exploited. I think there is a lot of potential use for it,” said Cavanaugh.

There is one thing Wong would change about the design, however.

“If we were to work on it again, we would definitely build an enclosure for electronics because this is a prototype and all of the electronics are exposed.”

The winner of ASET’s Capstone project of the year was a team from Lethbridge College who used bamboo as an alternative to steel reinforcement (rebar) in concrete construction projects.