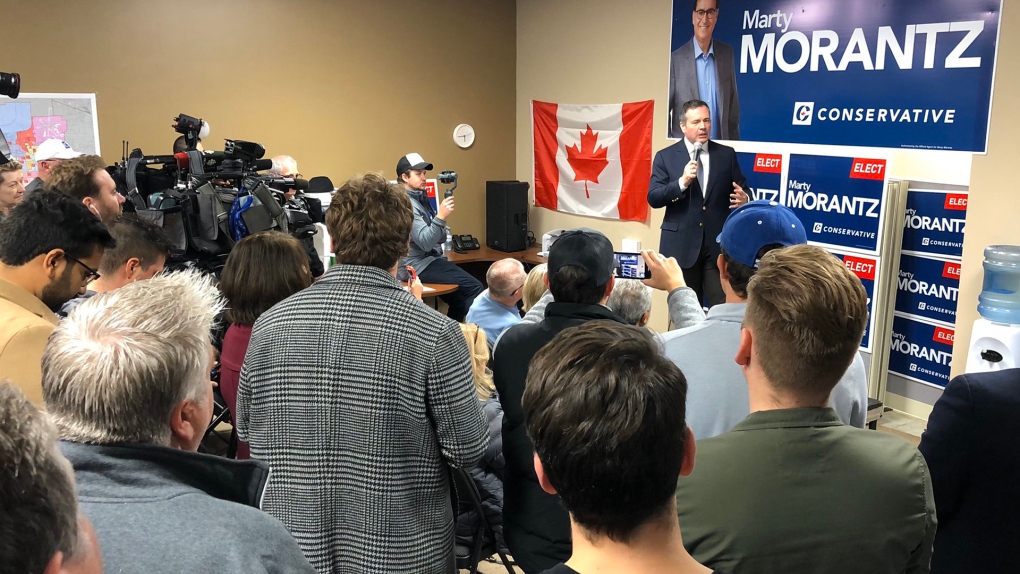 EDMONTON -- Alberta Premier Jason Kenney lent his support to a Manitoba Conservative candidate Saturday in a bid to turn the riding blue.

Huge support here for pipelines, and desire for a federal government that will respect the West. pic.twitter.com/gOGJvcpvKH

Kenney said he saw "huge support" for pipelines at the rally as well as "desire for a federal government that will respect the West."

In his own tweet, Morantz thanked Kenney "for coming to Winnipeg and sharing how together we can create prosperity and opportunity, so all Canadians can get ahead."

Kenney told media at the start of the federal election campaign that he would do whatever it took to elect a Conservative government.

He flew to Ontario last month to appear at an event alongside Conservative leader Andrew Scheer and has accused Liberal leader Justin Trudeau of sowing divisiveness.

"I'm just here as a leader of the third-largest economy in Canada to say we desperately need a new federal government," Kenney said at the event.

Other Conservatives like Saskatchewan Premier Scott Moe have kept out of the federal election campaign, declining to give endorsements.

Kenney has previously encouraged other UCP legislature members to help out in swing ridings on their own time, using their own money.

In a Facebook post, he said his trip to Winnipeg was funded by the Conservative Party of Canada.

What a crowd!! Huge thank you to @JKenney for coming to Winnipeg and sharing how together we can create prosperity and opportunity, so all Canadians can get ahead. #cdnpoli #elxn43 pic.twitter.com/P16jYEhtGz