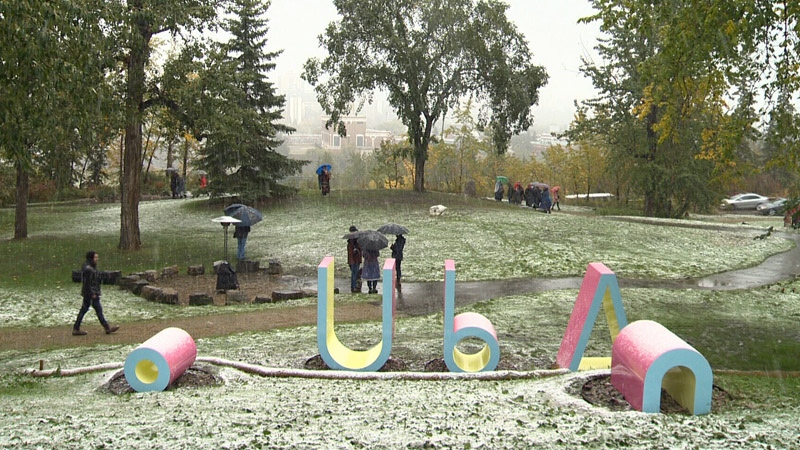 At the park’s grand opening Saturday, Mayor Don Iveson said it would help Edmonton residents appreciate the history of the land.

“This permanent showcase of Indigenous art in the heart of our city celebrates our diversity while strengthening our commitment to Truth and Reconciliation with Indigenous Canadians.”

Plains Cree Elder Jerry Saddleback, who was a member of the park’s steering committee, said the North Saskatchewan River is a special place which required ceremony or ritual by the Cree people who planned to cross it. “Our original peoples of this area held sacred knowledge that gave them a close spiritual relationship with our Mother Earth deity.”

The work of two Alberta artists — Tiffany Shaw-Collinge and Amy Malbeuf — is featured in the space, alongside that of Duane Linklater, Jerry Whitehead, Mary Anne Barkhouse and Marianne Nicolson.

“ᐄᓃᐤ (ÎNÎW) River Lot 11∞ reinforces the Indigenous presence, which has been part of this place for millennia,” said Sanjay Shahani, executive director of the Edmonton Arts Council.

Shahani also called the artworks an expression of cultural practice that “reveal an Indigenous worldview that honours the environment and the land, and the dignity of each creature living upon it.”

The park was developed as part of Phase Two, a $5.3 million step in the city’s Queen Elizabeth Park Master Plan. The master plan is a 10-year guide of development of the public space. It received approval from city council in 2013, and Phase Two received $500,000 from Western Economic Diversification Canada through the Canada 150 Community Infrastructure Program.