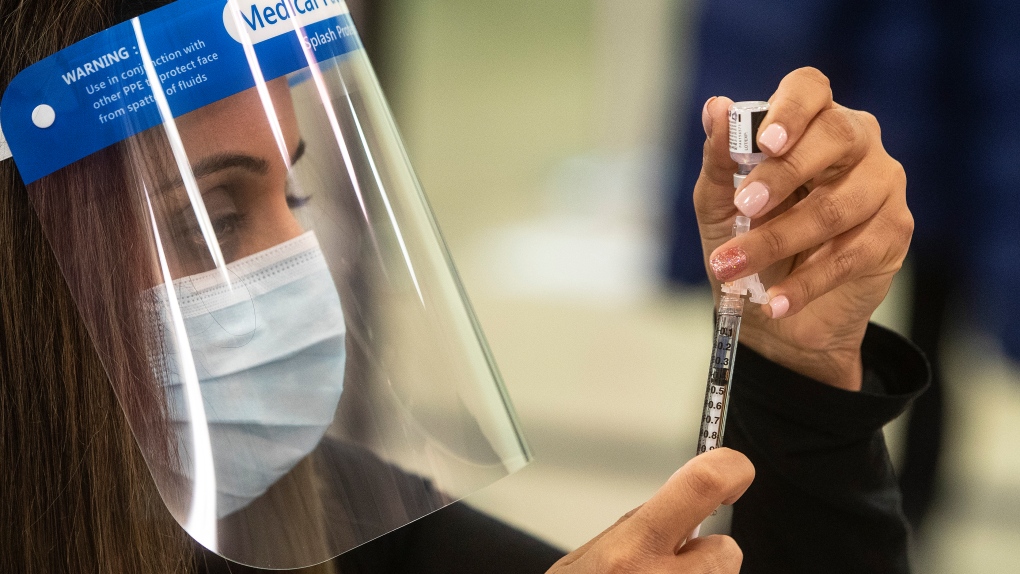 A nurse prepares to give the first COVID-19 vaccine to be distributed in Edmonton on Tuesday, December 15, 2020. THE CANADIAN PRESS/Jason Franson
Edmonton -

Alberta's COVID-19 numbers continued to worsen on Thursday as the number of hospitalizations, patients in intensive care and new cases all grew from the day before.

Alberta reported 550 new cases Thursday as active cases rose for a 26th consecutive day, up to 4,101 -- about where the active case count was the second week of June.

The province reported 146 COVID-19 patients in hospital, up three from Wednesday's adjusted total of 142. The patient count is the province's highest since the Stage 3 reopening date of July 1.

There are 36 Albertans receiving coronavirus care in ICUs, up four from Wednesday, and the highest patient count since July 30.

The province has had over 100 COVID-19 patients in hospital every day since Aug. 3 and more than 20 patients in ICU since the start of the month.

The province reported a 6.45 per cent test positivity rate on about 8,500 tests.

Alberta plans to end routine COVID-19 testing next week, with testing no longer recommended for those with symptoms unless the result is needed to direct future care.

In addition, the province's testing facilities will close down at the end of the month, leaving primary care settings such as hospitals and doctor's offices as the main venues for testing.

Alberta has already closed routine testing to asymptomatic individuals including close contacts to those who test positive.

Those limits on testing mean the daily case counts will lose much of their meaning without routine screening.

The next data update is scheduled for Friday afternoon.