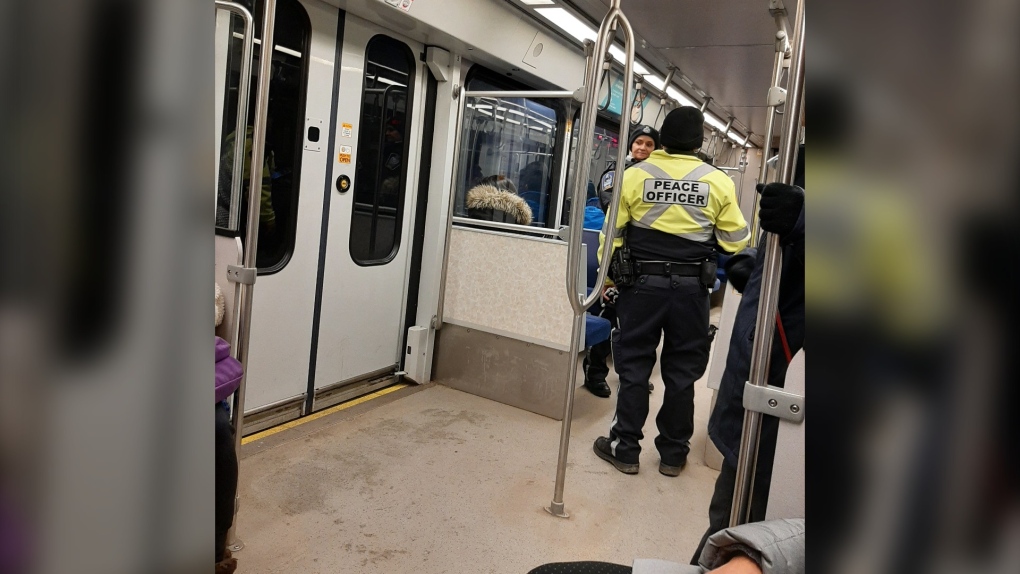 A photo appearing to show Edmonton transit officers ticketing a man for fare evading actually depicts them connecting a man with services and shelters during an extreme cold warning, the city says. Jan. 14, 2020. (Twitter/@mommypedals)

EDMONTON -- What looked like a heartless practice on a transit line amid an extreme cold snap is actually a good news story, the City of Edmonton says.

A photo tweeted at around 8:40 a.m. showed peace officers on an LRT train chatting with a passenger, then taking him outside.

The woman who tweeted the photo said the officers were checking for proof-of-payment and pulled one passenger aside because he couldn't produce his ticket.

"The officer said to him 'Hey, you're facing a $250 fine and can I see some ID?'" Sarah Bisbee told CTV News Edmonton. "They pulled him off the train at Grandin."

Bisbee said she was concerned that of all days to do ticket checks, officers were conducting them on what has so far been the coldest day of the year with a low of -34C.

Her tweet touched a nerve with many people who suggested that transit should be free, or officers should at least be willing to look the other way, on days that prompt extreme cold warnings.

"We're going to ticket people for trying to get somewhere warm or just trying to find somewhere to stay warm? It just seems callous to me," said Bisbee.

But the City of Edmonton told a different story, saying the officer did not write the man a ticket and instead gave him a free transfer, directed him to the right train and provided information on local shelters and support services.

"I think it's a tremendous good news story. We found an individual on the system, in conversation with the peace officers that individual found that they were a vulnerable citizen that needed some support," said David Aitken, Manager for Community Standards and Neighbourhoods.

Aitken said he understands calls for leniency on fare evaders during the coldest days of the year.

"Edmonton's transit system isn't free, and when it's extreme cold weather business users, general commuters are still required to pay for the system," he said. "But we also understand that there's a percentage of the population who uses the system to keep warm and we recognize that."

He said ETS peace officers are trained in dealing with vulnerable people and can use discretion when deciding whether or not to ticket them for non-payment.

"It's really important to understand what those other circumstances are so we can provide direction," he said.

Hi, thank you for sharing your concern. We looked into this and can confirm the Peace Officer was providing this vulnerable citizen, who didn't have a ticket, with a free transfer so he could get to his destination safely. 1-2

Thank-you for the update. I'm glad he did not receive a ticket.

However, if they were doing wellness checks, why did officers get on the train & ask for tickets? And why was he escorted off the train to be given a transfer? They could have given it to him on the spot.

Updated on what happened, Bisbee said she was glad no ticket was issued, but still questioned why officers were asking for tickets and threatening fines.

The city has also enacted its Extreme Weather Protocol, meaning additional emergency shelter spaces are being provided at the Commonwealth Recreation Centre.